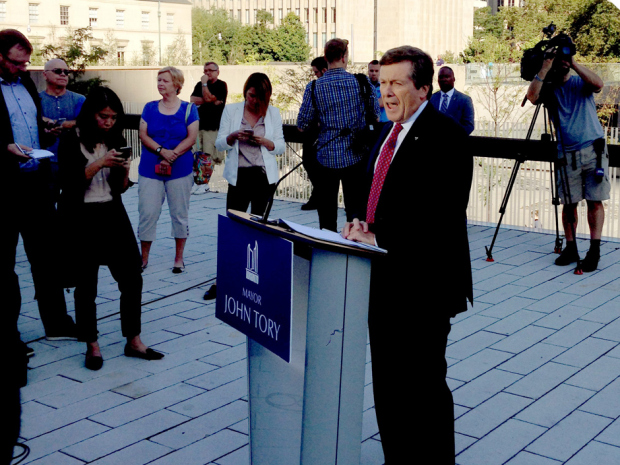 By Liam Casey and Diana Mehta, THE CANADIAN PRESS

Toronto will be a great venue for the Olympics one day but not this time, Mayor John Tory said Tuesday as he announced the city will not be bidding to host the 2024 Summer Games.

Tory had until Tuesday to submit a letter of interest to the International Olympic Committee to register as a potential candidate to host the Games.

“Let me be clear, I’m not saying no to the Olympics, I’m saying not this time.”

Talk of Toronto potentially making a bid emerged as excitement built around this summer’s Pan Am Games, which were hosted by Toronto and surrounding communities.

But he said there wasn’t enough time to put together enough information for the politicians, the business community and the city’s residents.

The city was focused on the Pan Am and Parapan Games, which ended last month, and had little time to crunch numbers, he said.

“I can’t look people in the eye at this point in our city’s development and tell them that an Olympic bid is the best use of our time or our energy or our investment,” Tory said. “But now I can look into the eyes of my colleagues at other levels of government and say this _ together we should be making the investments talked about in the context of the Olympics.”

Tory said the city’s time and money will be better spent investing in transportation and transit, addressing the affordable housing crisis and reducing poverty.

He said he “will continue to be very careful in how our money is invested and to what end.”

Tory didn’t need approval to submit a letter of interest to the IOC, but would have required support from city council and provincial and federal governments to go forward with a bid.

“In the end it is not my job to be rash. It is my job to make the best decision for Toronto,” Tory said.

He said he came to the decision late Monday, just a day before the deadline. The federal election also played a role in his decision he said.

He spoke to the big three party leaders about a possible bid.

“They were supportive and recognized the federal government had a role to play if we were to have an Olympic bid, but they were not writing _ and I would not ask them _ to write a big cheque,” Tory said.

He said business leaders were also cautious, because he wanted the majority of the bid to be funded privately.

“No one was rushing forward with their chequebooks to hand me big cheques,” he said.

He did announce that he would form an advisory group which would look at the merits of competing for future large-scale events like the Olympics, International Expos or soccer’s World Cup.

“When and if we decide to compete for any of these events, we will do it right,” he said.

The Canadian Olympic Committee says it respected Tory’s decision and appreciated the thorough consideration he had given the matter.

“We remain optimistic Toronto could and should host the Olympic Games in the future,” president Marcel Aubut said in a statement. “The Canadian Olympic Committee is determined to have the Olympics back in the country at the earliest opportunity.”

The IOC was supportive of Tory’s decision.

“We realize that time was too short for such a detailed project to get the necessary support in just a few weeks following the successful Pan Am Games,” IOC spokesman Mark Adams said. “The International Olympic Committee highly appreciates what Toronto has done as it continues to work on a future candidacy.”

Toronto made two unsuccessful bids for the Games _ in 1996 and in 2008 _ and Tory had said he doesn’t want to lead a third failed attempt.

Los Angeles, Paris, Rome, Budapest, Hungary and Hamburg, Germany have said they would be in the running for an Olympic bid. The winning city will be chosen in 2017.