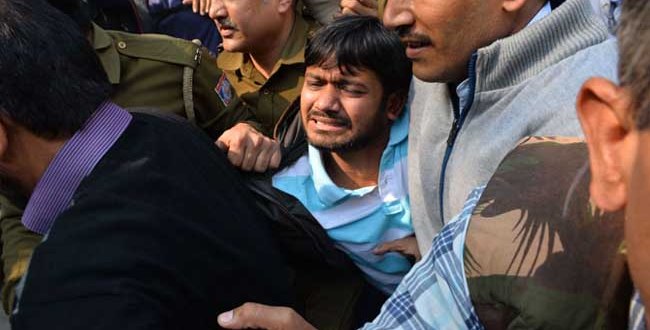 New Delhi, Feb 29 (IANS) The Delhi Police on Monday admitted on Monday before the Delhi High Court that “it has no video footage” which could show that JNU student union chief Kanhaiya Kumar, arrested on sedition charges, was shouting anti-national slogans.

The high court said it would pass the order on Kanhaiya Kumar’s bail plea on Wednesday.

“Do you have video evidence that Kanhaiya was raising anti-national slogans?” asked the court at which Additional Solicitor General (ASG) Tushar Mehta, appearing for police, denied of having any video in this regard.

At this, the court pulled up Delhi Police for not showing any evidence where Kanhaiya Kumar could be seen raising anti-national slogans. It also asked why police officers who were present there did not take any action.

“Event was on February 9. SHO was stationary at the JNU gate. When your three policemen were present there inside the campus in civil dress, why don’t they take cognizance when anti-national slogans were raised? Why did not they video record it? Why you waited for Zee news video?” asked the court.

Police said that an independent video was made by someone in JNU by an mobile phone after chief security officer was asked to oversee the event and it shows Kanhaiya Kumar’s presence at the spot.

To this, the high court asked whether Kanhaiya Kumar was seen shouting slogans and police admitted that he was present but it has “no footage of him shouting anti-national slogans”.

While, the Delhi Police opposed Kanhaiya’s bail plea, the Delhi government prayed the court to grant him bail, saying “no innocent should be punished” and there is not a single evidence of video/CCTV footage that he raised anti-national slogans.

Kanhaiya Kumar himself maintained that he did not raise any anti-national national slogans and did not lead any protest. Kanhaiya reached the venue when he heard that two groups of stude nts were quarrelling, said senior advocate Kapil Sibal appearing for him.

Kanhaiya was arrested in a sedition case on February 12 after the event held on the university campus against the execution of parliament attack convict Afzal Guru. He allegedly shouted anti-India slogans at the event.

Sibal said that Kanhaiya Kumar cannot be held responsible for anti-national slogans, posters or holding of event since he did not take permission for it. Neither the poster carried his name, he added. “People who shouted anti-national students were outsiders,” he said.

Mehta however told the court that a joint interrogation by the Intelligence Bureau and local police shows Kanhaiya was not co-operating, giving contradictory statements and denying his role.

Police said that all eyewitnesses identified Kanhaiya, said he was leading the procession and “participating” in anti-national slogan shouting. “Its a very delicate situation. There appears to be a movement. And this is beginning of a movement. We have to see who has financed it. There were people whose faces were covered,” said Mehta.

“If Kanhaiya is released it can have a pan-India impact. After this incidents similar slogans were raised in Jadavpur university and if he is given bail “then such incidents will get a boost,” he argued.

As the court asked if there were two groups at the spot, then “is there any proof that Kanhaiya was leading any group?”, police said as per witnesses, Kanhaiya Kumar was there and was leading the slogan shouting, but it has no video evidence. It told th court that a JNU official recorded the protest on his mobile phone, to which the court slammed police for not sealing the phone and sending it to a forensic lab. Police said that it was sent but could not produce any documents in support of its submission.