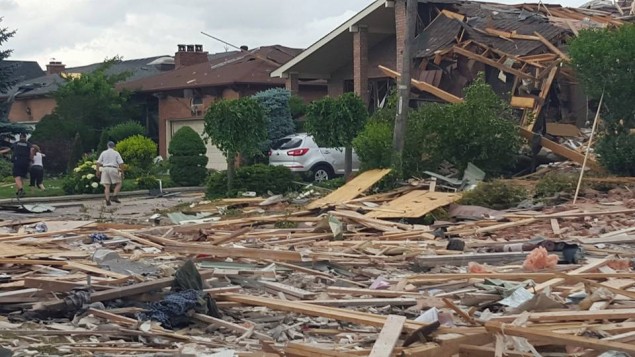 The Canadian Press
Mississauga, Ont.: Authorities say there don’t appear to be any “live victims” trapped under the rubble generated by a deadly explosion that blew apart one home and damaged at least two dozen others in a city west of Toronto.

One woman was killed and nine others suffered minor injuries in the blast in Mississauga, Ont., on Tuesday afternoon.

Mississauga Fire Chief Tim Beckett says a specialized canine search-and-rescue team that went into the rubble has found no signs of any remaining living victims.

He says residents from the homes on either side of the epicentre of the blast have been accounted for.

Beckett says work will begin today on just what caused the blast and warns that it will be a “long process.”

The investigation is being led by Ontario’s fire marshall’s office, which says it will be looking at the role gas might have played in the explosion.

An “outside perimeter” around the blast zone has also been shrunk this morning, meaning more people will be allowed back into their residences.