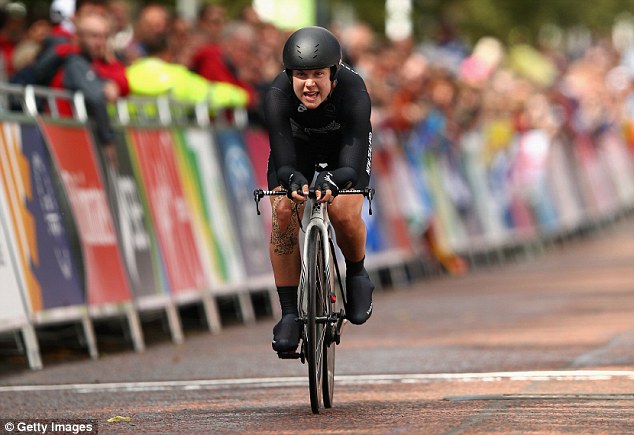 By Dave Skretta, THE ASSOCIATED PRESS

RICHMOND, Virginia: Tara Whitten cycled to 13th place in her first world championship time trial race in four years, and earned another spot for Canada in the event at next summer’s Rio Olympics.

Linda Villumsen of New Zealand captured gold, besting Anna van der Breggen of the Netherlands by just 2.54 seconds in a time trial that came down to the final rider. Whitten, who’s making a comeback after stepping away from the sport after the 2012 Olympics, posted a time of 41 minutes 56.10.

“I am definitely a little bit disappointed with how I rode today,” Whitten said. “I think I started out a bit quick, but I always do. It was my goal not to, so it’s a little bit disappointing to do that again. At the same time, I gave it everything I had and fought to the end. I have to be happy with that and just look at it as a first step in my comeback process.”

The last time trial Whitten completed at the 2011 world championships where she finished fourth. This year, she participated in three UCI time trials, finishing second at the Pan-American Championships and sixth at the Amgen Tour of California Invitational.

Karol-Ann Canuel of Gatineau, Que., finished the day in 15th position, with a time of 42:02.36. Canuel surprised many by posting the sixth fastest time at her first World Championships participation.

Villumsen, who has won two silver medals and three bronze at the world championships, finally knows what it feels like to stand on the top step of the podium.

It wasn’t until reigning champion Lisa Brennauer of Germany, last to roll off the start line, crossed the finish line five seconds adrift that Villumsen threw her arms up in victory.

“I hit the right notes all the way through the race. Everything was working my way today,” Villumsen said. “I can’t really believe it.”

Brennauer wound up with the bronze medal. Katrin Garfoot of Australia was fourth and two-time Olympic gold medallist Kristin Armstrong of the U.S. finished in fifth.

“I gave it everything I had today,” Armstrong said.

“It’s definitely bittersweet,” Costa said. “You want to go one better, but to be able to podium two years in a row, it shows consistency. I can’t be too upset about that.”

The competition continues Wednesday with the elite men’s time trial.