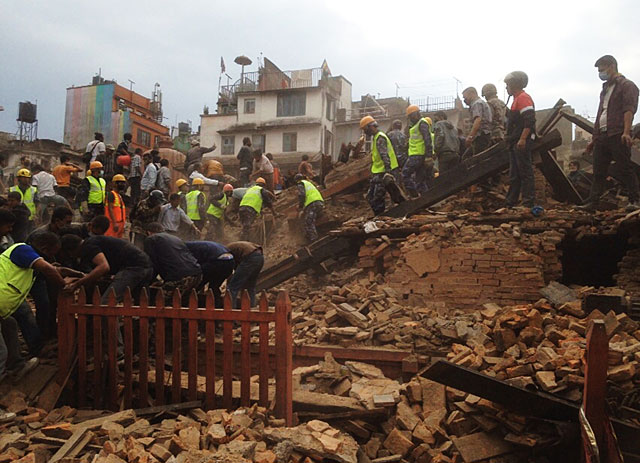 Kathmandu, May 4 (IANS) Nepal on Monday told all countries to withdraw their rescuers from the quake-ravaged country as India said it had carried out its biggest ever response to any natural calamity abroad.

As the death toll from the April 25 disaster surged to 7,365 with more than 14,000 people injured, Nepal prepared to send home all foreign rescue and search teams.

Since search and rescue work was almost complete, the remaining task can be executed by Nepali teams, the Central Natural Calamity Relief Committee said.

New Delhi, which has deployed hundreds of military and medical personnel across the Himalayan nation, confirmed it would be pulling out its rescue teams from Nepal along with 34 other countries.

“Rescue teams from all 34 nations have been asked to withdraw as it is now nine days since the quake,” external affairs ministry spokesperson Vikas Swarup said. He added that India’s “relief efforts will continue”.

The highest number of 2,838 deaths has been recorded in Sindhupalchok district followed by Kathmandu (1,202). Officials said 10,744 government buildings had been flattened. Similarly, 191,058 houses were destroyed.

Despite asking foreign teams to go, Nepal sought more relief material and funds from the international community to help the quake victims.

Foreign Minister Mahendra Bahadur Pandey said: “We need huge (amounts of) relief material to address the woes of thousands, including funds for rebuilding, reconstruction and relocation of thousands of structures and displaced people.”

Pandey was addressing the diplomatic communities including the ambassadors of India, China and the US.

In New Delhi, speaking on the occasion of Buddha Poornima, Prime Minister Narendra Modi said the situation in Nepal was “beyond our imagination” and said India would share the pain of the Nepalese people.

“I pray to Buddha that the earthquake victims should not suffer any more,” he added.

In Kathmandu, the Indian embassy declared that New Delhi’s massive rescue and relief work in Nepal was its biggest response to a natural calamity in a foreign country.

Ambassador Ranjit Rae made the observation during a briefing given to the Kathmandu-based diplomats on India’s ongoing assistance following the quake that has caused widespread destruction.

“Operation Maitri” is the largest ever support operation by India in response to a natural calamity abroad, a statement from the Indian embassy said.

“It represented not only the deepest commitment at the highest political level in India but also overwhelming outpouring of support from the people of India and over a dozen Indian states including those bordering Nepal.”

He said the first Indian Air Force flight landed in Kathmandu with rescue teams from the National Disaster Response Force (NDRF) and relief material within six hours of the devastating quake.

“These teams have been working round-the-clock since their deployment in close coordination with the government of Nepal,” he said.

Eight MI-17 and five ALH helicopters of the Indian Army, operating from Kathmandu and Pokhara, have carried 207 tonnes of relief material in 449 sorties, evacuated over 900 injured and transported over 1,700 stranded people of various nationalities, the envoy said.

He added that some 4,500 tonnes of relief material containing food, water, medicines, tents, blankets, tarpaulins and plastic sheets from Bihar and Uttar Pradesh had reached Nepal.

Eight fresh tremors were recorded on Monday in Nepal. A senior official said the aftershocks might last for months “and there is no need to worry much”.

Expressway project should be given to India: Nepali Congress leader