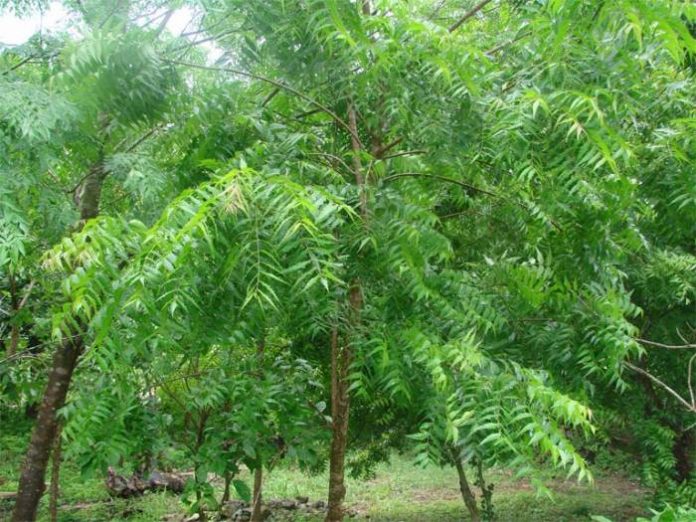 Here is the story how the Neem tree from India was rediscovered and most people don’t know anything about it! The Neem tree, Azadirachta indica has been part of the oldest botanical medical system in the world, AYURVEDA from India with a history of over 5000 years, but it seemes that the benefits of this miraculous versatile medicinal tree were almost forgotten till Professor Dr. Heinrich Schmutterer from Germany working as an agricultural research officer in Sudan in 1959 noticed an outbreak of locusts. He saw a swarm settling on the Neem trees, but soon they flew away. In spite of their voracious behavior, the locusts did not feed on Neem. After they departed, he noticed that wile every other plant was completely defoliated, the Neem trees were still green and unharmed. And, as an expert on tropical pests, he became curios.

In an interview with the Times of India newspaper December 2, 2002 which was also published in the Global News Update newsletter of the Neem Foundation, Mumbai, India it came to them as an surprise that not an Indian doctor but a hearty German turns to be “the most knowledgeable person about Neem in the world” and Prof. Dr. Schmutterer has been called “The father of modern Neem.”

Professor Dr. Schmutterer attended as keynote speaker the second World Neem Conference in 2002 in Mumbai and talked about the Neem tree as “perhaps the most useful tree in the world!”

He worked with the Institute of Phytopathology & Applied Zoology at the Justus Liebig University of Giessen, Germany and set-up a Neem research lab. As a result he published in 1995 his first book ‘THE NEEM TREE” and worked as editor with 50 academics from around the world on his second revised book of 893 pages for the commercial agriculture industry which was published in 2002 by the Neem Foundation, Mumbai. He was also a contributor to the book “Neem A Tree For Solving Global Problems,” published by the Academy Press, Washington, DC in 1992 and was interviewed for the video “What’s in a Neem?” from the Canadian Broadcasting Corporation, Toronto, Ontario for the program “The Nature of Things” by Dr. David Suzuki shown in January 1994.

This is when my journey started viewing the video from Dr. David Suzuki and I have been doing Neem research for the last 23 years and became fascinated what this tree offers to mankind. For thousand of years humans have sought to fortify their health and cure various illness with herbal remedies. The search for a true panacea or cure-all has been undertaken by virtually every civilization. While hundred or thousands of substances have been tried and tested,  few have withstood modern scientific scrutiny. Perhaps no other botanical better meets the true definition of a panacea than the Neem tree, a tropical evergreen native to India and Myanmar (formerly Burma).  From ancient to modern times, every part of this fascinating tree has been used to treat hundreds of different maladies. This miraculous healing herb is truly an “ancient medicine for a modern world, no wonder that the United Nations declared it as “The tree of the 21st Century” and in India it is called “The Village Pharmacy.”

By using our Neem shampoo, Neem oil and Neem soap with no harmful ingredients we developed beginning of 1994 and introduced it as the first company to the Canadian market, I was able to alleviate my severe psoriasis that I had suffered for over 40 years!! For me it was really a miracle and I started in 2011 writing a manuscript for the book “Neem – Nature’s Healing Gift to Humanity” which became a labor of love and passion since I wanted to share my own personal experience. My book was published in 2016 and if you want to learn more about it, please check these websites: