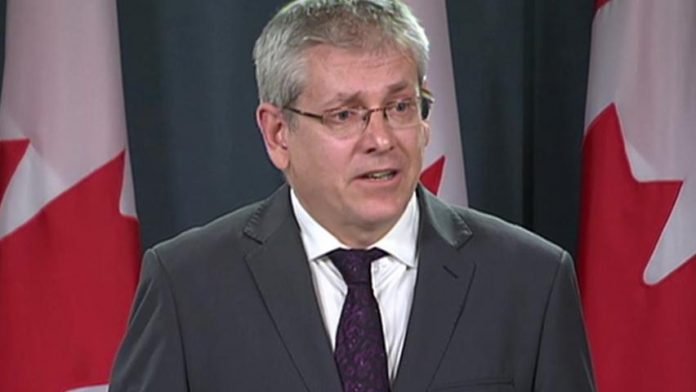 OTTAWA: The NDP wants the RCMP to consider laying charges against Nigel Wright and up to a dozen other staffers in the Prime Minister’s Office for their part in covering up the scandal over Sen. Mike Duffy’s expenses.

Angus says Wright’s testimony has also revealed that at least a dozen other senior staff in the Prime Minister’s Office were involved in a plan to make a secret payment to Duffy, interfere with an independent audit of his expenses and deliberately mislead the public about the entire affair.

Wright has been on the hot seat at the Duffy trial for a week, testifying about his decision to personally give the senator $90,000 so that Duffy could reimburse the Senate for questionable expense claims.

In addition to charges of fraud and breach of trust, Duffy faces one count of bribery for accepting Wright’s money; however Wright has not been charged for giving Duffy the money.

Angus notes that the Parliament of Canada Act specifies that no senator shall receive compensation for services in rendered in relation to any matter or controversy before the Senate; it also makes it illegal for anyone to offer such compensation.

“Given the details that have now come to light about the $90,000 Mr. Wright paid to Mr. Duffy and the involvement of at least a dozen staff in the Prime Minister’s Office, I am writing to ask whether the RCMP will now be laying charges against Nigel Wright,” Angus says in the letter to Paulson.

“I am also asking, based on this new information, whether Ray Novak or any other staff working in the Prime Minister’s Office should be investigated for their role working with Mr. Wright in relation to this matter.”

Emails disclosed during the trial suggest that Novak, Harper’s principal secretary at the time, was aware that Wright was sending Duffy a cheque. He has denied that.

Harper has been dogged by questions about the matter as he campaigns for the Oct. 19 election. He continues to insist that he knew nothing about Wright’s payment and that he believed Duffy had repaid his expenses out of his own pocket.