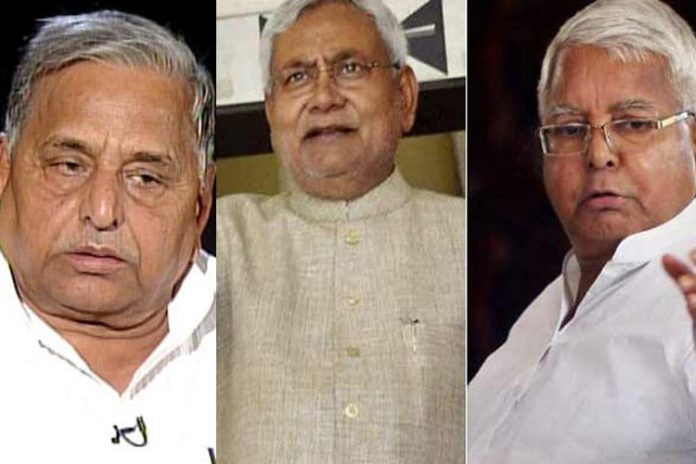 Lucknow/Patna/New Delhi, Sep 3 (IANS) Uttar Pradesh’s ruling Samajwadi Party on Thursday walked out of the grand coalition of regional parties in poll-bound Bihar, charging the JD-U-RJD alliance on not consulting them in seat distribution and humiliating them by doling it just five seats. It announced it will contest the elections on its own.

The announcement by SP general secretary Ram Gopal Yadav, who had opposed the alliance from day one, in Lucknow was followed by the resignation of senior Rashtriya Janata Dal (RJD) leader and former union minister Raghunath Jha from the party who walked into the SP fold along with Ram Jeevan Singh of the Janata Dal-United.

While the SP had very little presence on the ground in Bihar, its moves on Thursday rendered a body blow to the perception of unity and expansion of the ‘Maha Gathbandhan’ in Bihar which is likely to go to polls within the next two months.

In Patna, the SP’s Bihar unit chief Ram Chander Singh accused the Nitish Kumar-Lalu Prasad combine of humiliating his party even though Mulayam Singh was the tallest leader of the alliance.

He also said that in coming days the party will talk to other small players in the state and put up candidates with the sole aim of winning.

Jha told media persons that he was sidelined in the party by Lalu Prasad and would now give his best shot to the SP.

JD-U’s national president Sharad Yadav however struck a conciliatory tone, saying that he will not allow the SP to walk out of the Janata Parivaar and he will talk to Mulayam Singh and try to crease out the differences. All will be fine soon, he told reporters in New Delhi.

“Our alliance is intact and will remain intact. I will soon talk to Mulayam Singh Yadav,” Sharad Yadav said while adding that he “got to know through the media that the Samajwadi Party is not happy with the seat sharing”.

“In a grand alliance, such things happen. We will not allow him to walk out of the alliance. Their concerns will be addressed soon,” he added.

He however declined to respond to Ram Gopal Yadav’s accusations. “I am not going to respond to any of the accusations. We know the problem has come to our doorsteps and we know how to solve it. I have a lot of experiences in resolving such problems,” he said.

The JD-U and the RJD had decided to contest 100 seats each for the 243-member Bihar assembly, while the Congress was given 40 seats and the Nationalist Congress Party three. Later, RJD leader Lalu Prasad, whose daughter is married to Mulayam’s grand nephew, gave away five seats out of his quota to the SP.

Now, there are indications that the party would field 150 candidates in Bihar.

He also clarified that his party could not be blamed for the division of secular votes, saying the BJP did well in recent elections in Rajasthan, Madhya Pradesh and Gujarat even in a straight contests.

Ashok Singh, president of RJD’s Uttar Pradesh unit, called the SP decision “very unfortunate” and called on all to get together and rethink the issue. But SP sources ruled out any such possibility and added that the decision was final.

Meanwhile, senior BJP leader Shahnawaaz Hussain said that Mulayam Singh had walked out of the alliance in Bihar as he knew that the Janata Parivaar was a sinking ship, while Bihar BJP legislator Arun Sinha said the development shows “how desperate and over-ambitious” were and alleged they had come together just for “the sake of their personal benefits”.

IS kills 30 troops in Syrian province