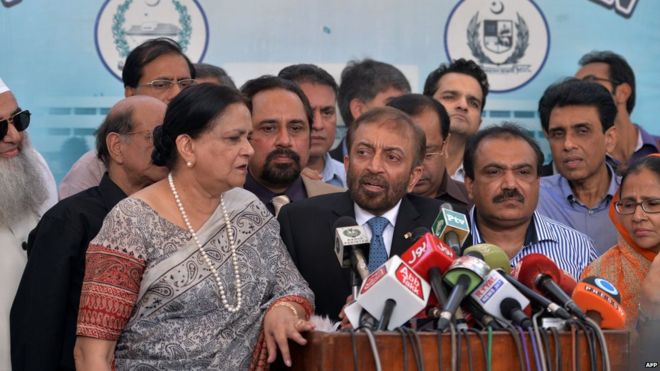 Islamabad, Aug 12 (IANS) Lawmakers of Muttahida Qaumi Movement (MQM) on Wednesday resigned from the Pakistani parliament over what it alleged “victimisation” of its activists during the security forces’ ongoing operation in Karachi.

The MQM members in the National Assembly, the Senate and the Sindh provincial assembly submitted their resignations, Xinhua reported.

The party has a strong support-base in Karachi and some urban areas of Sindh province.

The government has denied victimisation of any political party and insists that the security forces are only targeting terrorists, criminal gangs, kidnappers and extortionists in the operation in Karachi.

The paramilitary forces had launched the operation last year in the wake of growing incidents of target killings, kidnappings for ransom and extortion in Karachi, also the commercial hub of Pakistan.

Resignations have not yet been accepted and their legal aspects are being discussed, parliamentary sources in Islamabad said.

Legal experts say that the speaker of the National Assembly and chairman of the Senate are bound to forward the resignations to the Election Commission for a final decision.

“MQM, the political party to which I belong, is being victimised in the garb of the targeted operation in Karachi for eliminating crimes and terrorism by the government of Sindh,” the resignation letter of every MP reads.

Farooq Sattar, the leader of MQM in the National Assembly or lower house of parliament, led the party’s MPs to meet the speaker and submit the resignation.

MQM has 24 members in the 342-member National Assembly and eight senators in the 104-member upper house. It has 51 members in Sindh assembly.

The resignation letter claimed that nearly 5,000 workers, supporters and office-bearers of MQM have been arrested during the ongoing operation.