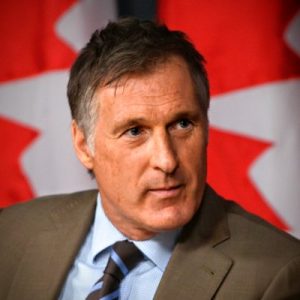 Ottawa: Maxime Bernier declared open war on his own party Thursday as the outspoken and controversial Conservative MP abruptly quit the Tory caucus, announced plans for a new political movement and derided his former leader and colleagues as “intellectually and morally corrupt.”

With Conservative caucus members gathering in Halifax for a policy convention that was expected to bring the Bernier boil to a head, the Beauce MP instead stayed behind, summoning journalists to a snap news conference that proved breathtaking in its defiance.

“I am no longer a Conservative,” he declared after reading a scathing diatribe against his party and its leader, Andrew Scheer, the Saskatchewan MP who narrowly edged Bernier out of the leadership job last year in a loss some have suggested he never got over.

“I am now convinced that what we will get if Andrew Scheer becomes prime minister is just a more moderate version of the disastrous Trudeau government,” he said.

“I have come to realize over the past year that this party is too intellectually and morally corrupt to be reformed.”

With the aftershocks still reverberating, Scheer emerged in Halifax to fire back.

“He has decided that he is more important than his Conservative colleagues and indeed the Conservative party. He has traded an opportunity to influence policy in government for his own personal ambition.”

Bernier said he plans to contact Elections Canada immediately about the path towards creating a new party and will spend the next several weeks travelling the country to meet with people interested in joining his cause.

“I hope that the majority of Conservatives will join our new party if they want to beat Justin Trudeau,” he said.

Bernier said it’s the party and its current leader that has lost its way, not him. Scheer, he said, is too focused on polls and focus groups, and too afraid of being attacked by people on the left and in the media to make good Conservative policies.

He specifically pointed to Scheer’s support for retaliatory tariffs against the United States, saying he was told internal party polling showed Canadians supported the Liberal plan and the Conservatives would therefore support it unless the polls changed.

Bernier’s decision comes with the Conservatives gathered in Nova Scotia and marks the culmination of months of turmoil, much of it fomented on Twitter, between himself, Scheer and many Conservative MPs who felt he was jeopardizing their chances in the next election.

Bernier’s insistence on supporting an end to supply management, in defiance of Conservative policy, and his recent reflections about the perils of “extreme multiculturalism” had Scheer distancing himself from Bernier and his comments.

Earlier this week, Alberta MP and immigration critic Michelle Rempel all but challenged Bernier to pick a side, and on Thursday, he did just that.

“The Conservative party has abandoned conservatives,” he said. “It does not represent them anymore. And it has nothing of substance to offer Canadians looking for a political alternative.”

“If we want conservative principles to win the battle of ideas, we have to defend them openly, with passion and conviction. That is what I want to do.”

As recently as three weeks ago, Bernier had said he was planning to run for the Conservatives in the next election despite Scheer’s decision earlier this summer to strip him of his portfolio in the Tory shadow cabinet.

Bernier said he decided to quit the party Aug. 14 after speaking to Scheer, just prior to the Tory leader’s statement criticizing Bernier’s comments about too much diversity being bad for Canada.

“We had a very polite discussion. After that discussion, I realized that I don’t have any place in that party anymore.”

The news appeared to catch most Conservatives completely by surprise, including some who supported Bernier in the leadership race.

Ontario MP Tony Clement says he wasn’t sure what Bernier’s decision would mean for the Conservatives, but it likely won’t end well for the longtime MP from Beauce, near Quebec City.

“History teaches us that people who quit are replaceable and forgettable,” Clement said.

“You had every opportunity to stand in caucus to share your views and provide input,” Doherty wrote.

“When given the opportunity, you stayed silent or blamed it on others around you. You’re Twitter tough … all bark no bite.”

How any new right-of-centre party will impact the political scene in Canada depends a lot on how much money Bernier can raise and how many Tory supporters and donors he takes with him. It also depends on how many candidates he recruits.

Steven Fletcher, a Bernier supporter and former Conservative cabinet minister who was recently denied the chance to run for the party again in the next election, said he thinks Bernier won’t have trouble getting a following.

“There are a lot of people that will support Bernier,” and not just in Quebec, Fletcher said.

“In Winnipeg, Bernier won every (leadership) ballot by a convincing margin. This is amazing for a guy from Quebec, but his policies around aerospace and supply management have a lot of support in Winnipeg.”

By Mia Rabson and Janice Dickson, The Canadian Press