Half Widow, directed by Danish Renzu, written by Gaya Bhola, Danish Renzu, and Sunanya Kachroo, and with cinematography by Antonio Cisneros is a gem of a film in its beauty, polish, and radiance. I use the aesthetic metaphor deliberately because of the film’s use of beauty as the means of telling a searing story with radiating implicature, of expanding signification in the viewer’s mind, within a political context of brutally imposed silence. What utterance is possible in a land almost one tenth the size of British Columbia under military occupation by some 600.000 troops? Can beauty speak? 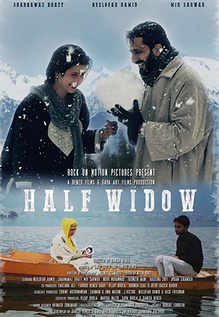 Kashmir has ben used in Indian cinema as a backdrop for filmic romance and nationalist narrative. Vishal Bhardwaj used Basharat Peer’s screenplay to present Kashmir under Indian military occupation through the frame of Shakespeare’s “Hamlet” in Haider. Kashmir has been a commodity or been spoken. In Hallf Widow it speaks in the every day beauty of its ordinariness. The term “half widow” is specific to its ordinary condition under military occupation, referring to women whose husbands have been disappeared by the military and who are therefore neither alive nor dead. It is a story of a very ordinary woman’s desire to be married and have a family, of domestic love of husband and wife, sister and brother,f aunt and her nephew and niece. What is significant is how fragile this ordinariness is and how heroic and “spiritual” the effort to retain this beauty and overcome the trauma inflicted by arbitrary power.

In Half Widow beauty speaks where speech is forbidden. And this beauty is conveyed, paradoxically, through a stylistic realism in direction and exquisite cinematography by Antoni Cisneros, which makes the film a feast for the eyes in composition and lighting. This is complemented by a soundscape that is both significant and organic, the sound itself speaking Kashmir. The music by Alokanda Dasgupta and Jaan Nissar Lone takes us to the ordinary heart of Kashmir. The acting is superb. A film not to be missed.

Priyanka Chopra to be presenter at Academy Awards