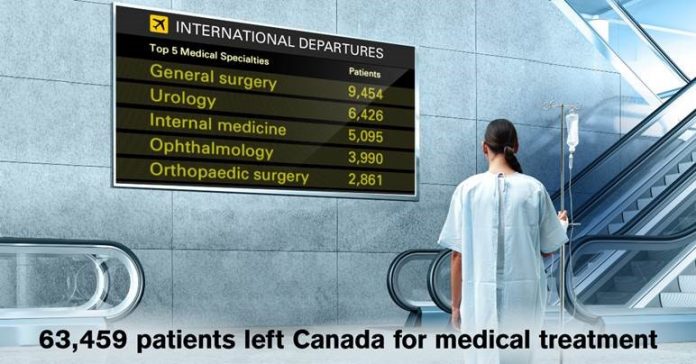 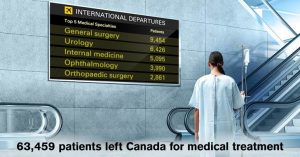 Vancouver: An estimated 63,459 Canadians travelled abroad for medical care in 2016—up nearly 40 per cent over the previous year, finds a new study released today by the Fraser Institute, an independent, non-partisan Canadian public policy think-tank.

“More and more Canadians clearly feel they must leave the country to get the medical care they need,” said Yanick Labrie, Fraser Institute senior fellow and co-author of Leaving Canada for Medical Care, 2017.

So why are Canadians leaving the country for treatment?

Reasons may include Canada’s long wait times. In 2016, according to the Fraser Institute’s annual measurement of health-care wait times, patients waited 10.6 weeks for medically necessary treatment after seeing a specialist—almost four weeks longer than what physicians consider clinically “reasonable.”

According to study estimates, more patients (9,454) travelled abroad for general surgeries than any other treatment.

High numbers of Canadians also left the country for urology treatment (6,426), internal medicine procedures such as colonoscopies, gastroscopies and angiographies (5,095) and ophthalmology treatment (3,990).

Among physicians in Canada, otolaryngologists (which include ear, nose and throat specialists) reported the highest proportion (2.1 per cent) of patients travelling abroad for treatment, followed by neurosurgeons (1.9 per cent).

Across Canada, physicians in British Columbia reported the highest proportion of patients (2.4 per cent) leaving, while Ontario saw the largest number of patients (26,513) who left the country for treatment.

In fact, seven of 10 provinces saw an increase in the number of patients leaving the country for treatment, with only Newfoundland and Labrador, P.E.I. and New Brunswick experiencing a decline.

“Considering Canada’s long health-care wait times, which can result in increased suffering for patients and decreased quality of life, it’s not surprising that so many Canadians are travelling abroad for medical treatment,” Labrie said.