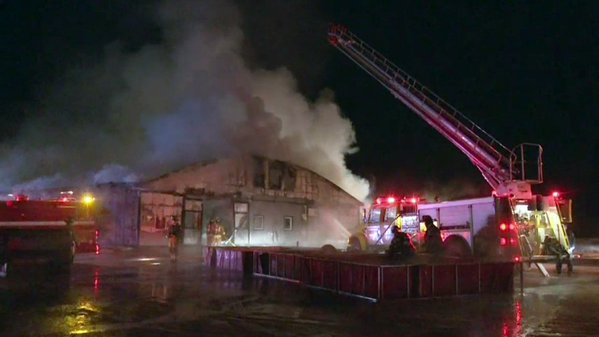 PUSLINCH, Ontario: The deaths of 43 racehorses in a massive barn fire is more than just a professional catastrophe, it’s akin to losing members of a family, one trainer said Tuesday.

Dan Lagace was working with seven horses that were being housed at the Classy Lane Stables in the southern Ontario town of Puslinch, about 20 kilometres south of Guelph. All of his animals and three dozen others perished Monday night in a blaze that could only be subdued through the efforts of 50 firefighters from multiple communities.

Lagace said he got word of the fire around 11 p.m. Monday, around the same time fire officials said the blaze was reported by a neighbour.

He rushed to the scene from his home in nearby Cambridge, but said he could only stand helplessly by as the building that contained both his livelihood and loved ones was engulfed in flames.

“It’s almost like losing a child. These horses, they’re every part of your life,” the 38-year-old said in a telephone interview. “On Christmas morning, when other people are opening gifts with their kids and stuff like that, we’re out at the farm making sure they’re taken care of first. On Sunday mornings when other people are sleeping in, we’re there too.”

Lagace said the blaze also represents a devastating professional setback. He said he has virtually nothing left, since equipment amassed over years was also destroyed in the fire.

Groomers, veterinarians, blacksmiths and other professionals involved in the industry will be feeling the effects of the equine deaths for months to come, he said.

Millier had been vacationing in Florida when he got word of the fire and hastily flew back to Canada to survey the damage. Despite the advance warning, he said he can still barely take it in.

“I’m just waiting to wake up,” he said. “It’s not real. It’s a dream. You don’t expect something like this to really happen to you.”

Millier said 43 horses were in the barn when the fire broke out. The death toll would have reached 45, but two other horses normally housed in the barn were out at races at the time.

Grief over what’s being described as a multimillion-dollar fire is not just confined to the owners and trainers, according to Puslinch’s fire chief.

Steven Goode said the community is now trying to process one of the most significant emotional and financial losses in its history as officials with the Ontario Fire Marshal’s Office launch an investigation to determine its cause.

“We consider this a horse community and it is absolutely devastating,” Goode told a news conference.

The fire broke out on a night when temperatures dipped as low as -20 C.

Local crews responded quickly, but found the barn fully engulfed in flames once they arrived on scene, Goode said.

The dozens of firefighters from Puslinch, Guelph, Cambridge and Hamilton had to struggle with adverse conditions caused by the frigid temperatures, he said, adding the wintry weather caused hose lines to keep freezing up and created challenging road conditions.

Goode described it as a “multimillion-dollar” blaze that is “the highest dollar loss that we’ve experienced in our township.”

Neither Lagace nor fellow trainer Ben Wallace had any safety concerns about the facility before the fire broke out.

Wallace, a decorated trainer once honoured with the O’Brien award for Canada’s trainer of the year, said he’d been using the Classy Lane Stables for more than a decade.

“It’s a state-of-the-art facility,” said Wallace, who lost 17 horses in the blaze. “It’s owned by great people. They were diligent and did everything that certainly I felt was necessary.”

Wallace’s losses include a horse that had already earned more than $1 million over his racing career. Six-year-old pacer Apprentice Hanover had placed 10th in the North America Cup in 2013, a race for the top three-year-olds in his category around the world.

Jody Jamieson, who drove Apprentice Hanover for the majority of his races, said he’s “absolutely devastated.”

“It may be a little bit selfish of me at this point but he’s been, if not the best, one of the best horses that I’ve been driving for the last three years,” Jamieson said.

“Apprentice Hanover was the type of horse you dream of,” he said. “Just thinking about it here now, I get a little choked up. He just didn’t deserve this demise, none of them did.”

Classy Lane co-owner Barb Millier said the standardbred horses traditionally raced at the Mohawk, Woodbine and Flamboro Downs racetracks in southern Ontario. Standardbreds race in front of a two-wheeled, one-person cart known as a sulky, whereas thoroughbreds are raced with jockeys sitting astride them.

The Classy Lane website says the facility opened in 2003 and has five barns that accommodate 222 horses.

By Tuesday afternoon, several crowdsourcing campaigns had begun to help raise money for those impacted by the fire. One GoFundMe campaign had raised nearly a third of its $15,000 target in its first four hours.

By Michelle McQuigge in Toronto, With files from Dan Ralph