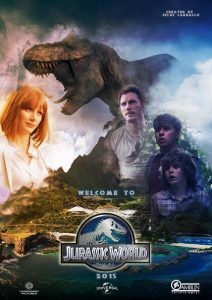 Give it up to Steven Spielberg. Having just left B.C. after wrapping a new Roland Dahl fantasy and doing finishing touches on the new Tom Hanks spy caper Bridges of Spies Hollywood’s golden boy goes back in time to freak us out with more dinosaurs in Jurassic World. Universal Studios, the company that gave Spielberg his first big break, clearly did something right as this pic is already a massive hit. Catch all the excitement at Cineplex Odeon arenas still left standing in B.C.
History has a way of repeating itself. This fantasy is the fourth in the dinosaur series and clearly is better than the previous two. Fresh faces with just one holdover from the first break-out movie will keep viewers on edge throughout. John Hammond’s desire for a theme park all dinosaur has now reached star status globally. Think Disneyland for the future relying on creatures from the past and you sort of get the picture.
Scenic Costa Rica is home for this special larger than life theme park owned by a reclusive billionaire and his moneyed shareholders. Leave it up to a finicky number crunching lady to oversee the bulk of the operation and leave the “animal” training to the lesser blue collar employees Bryce Dallas Howard shines as Claire, a lady who may be good with day to day operations but is a dud with kids. Given the opportunity to host two young family members things go from bad to worse for the wretched aunt as the boys get lost and the animals get loose.
Man of the moment and ace animal handler Owen is as charming and cocky as they come. Trust Chris Pratt (Guardians of the Galaxy) to click with both audiences and animals as the likeable, easy-going mild-mannered well intentioned trainer who senses something is wrong. How right he is.
Great 3-D imagery and some tenacious monsters on the loose that come from bad science make Jurassic World a lot of fun. Anyone who has never seen the original will love this movie. Lacking that original’s novelty factor and without the truly memorable characters from the original Jurassic World simply does not have the same suspense level as the classic masterpiece. Still this is still a fun popcorn movie that will make you think twice about visiting any amusement park.

‘I Am Mr. Mother’ worth watching: Tara Alisha