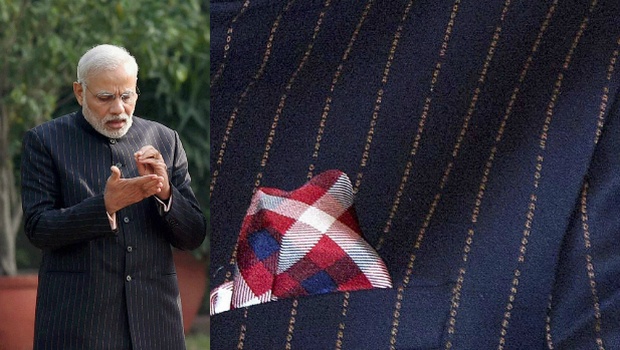 “This suit shall be kept in my office. I feel very happy and it will always remind me that I contributed to the prime minister’s Clean Ganga mission,” a delirious Patel told media persons soon after his bid was declared the best.

Incidentally, Patel was not the top bidder. Two minutes after the closing of the three-day auction, another diamond merchant bid a whopping Rs.5 crore for the suit.

However, the bid was rejected since it was time-barred as per the auction rules, and Patel, who loves flying aircraft and driving luxury vehicles, was declared the highest bidder.

Patel would be required to complete the auction formalities, pay up the bid amount Saturday before he is given possession of the prized two-piece bandhgala suit worn only once by the prime minister during the visit of US President Barack Obama last month.

He is a co-owner of Diamond Aeronautics, a private airline launched in October 2014 with three executive jets and a helicopter connecting Surat with other important cities.

The suit was the star attraction among 455 items that went under the hammer. The proceeds of the auction will go towards the Clean Ganga mission.

It has the name ‘Narendra Damodardas Modi’ weaved into it in glittering gold letters.

The suit kicked up a political row with opposition parties accusing the prime minister of indulging in ‘narcissism’ and questioned how a ‘tea-vendor’ could afford the expensive suit, reportedly costing around Rs.1 million.

At the three-day auction, it was put on a life-size mannequin resembling Modi, as the bidders examined it closely before announcing their bids.

A majority of the bidders were leading diamond merchants, top business personalities and builders.

The inaugural bid of Rs.51 lakh was made on the first day of the high-profile auction.

By Friday afternoon, the figures hovered around Rs.2.31 crore, but suddenly shot up as the closing deadline approached, with Patel’s Rs.4.31 crore declared the highest.

All the 455 items – which went on auction at the SMC Science Convention Centre – were gifted to Modi in India and abroad in the past nine months.

Since his days as the Gujarat chief minister, Modi introduced the tradition to auction such gifts for various charities and had raised around Rs.95 crore in his 13 years in the saddle.