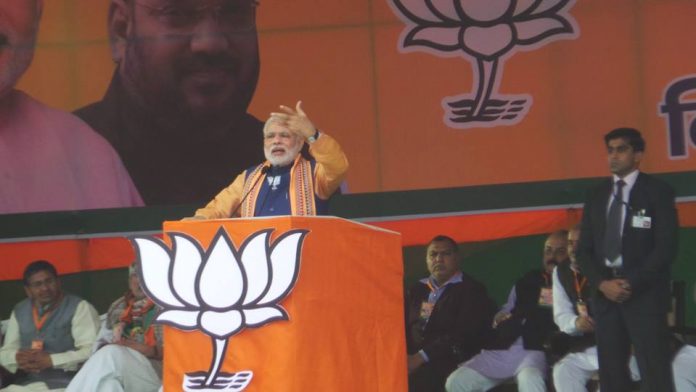 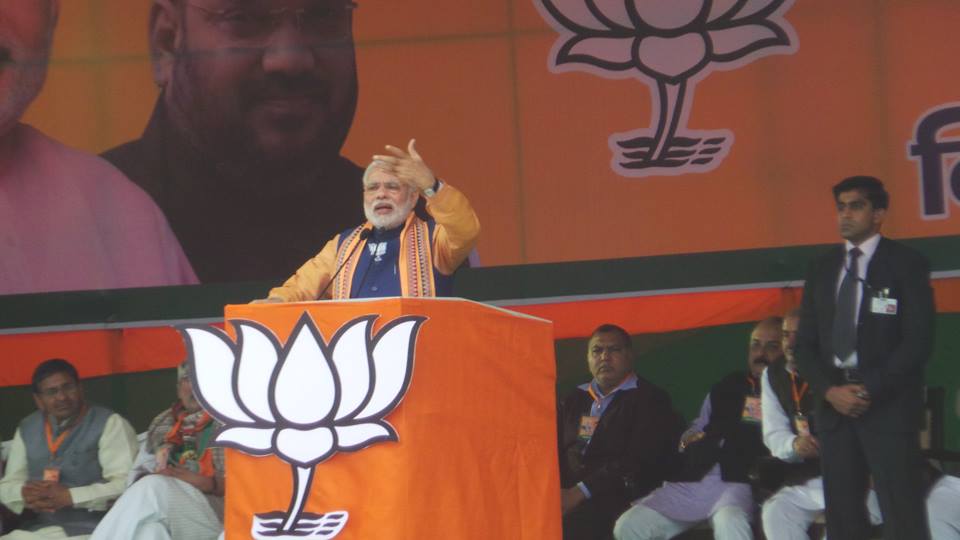 New Delhi, Feb 3 (IANS) The gloves came off Tuesday as Prime Minister Narendra Modi accused the AAP of “shamelessness” for allegedly accepting dubious election funds, while AAP chief Arvind Kejriwal challenged the government to arrest him if he was indeed guilty.

With three days left for electioneering to end ahead of the Feb 7 assembly polls and pollsters claiming that the Aam Aadmi Party was emerging as favourites, the Bharatiya Janata Party did not mince words in attacking its chief rival.

The fuel to the high-decibel attack against the AAP came after the AAP Volunteer Action Manch (AVAM), a breakaway group of the AAP, raised questions about the funding of the Kejriwal-led party.

Modi, addressing an election rally in Rohini in north Delhi, said the AAP was till now talking about who was more corrupt — the Congress or the BJP.

“Now we know the truth. Look at their shamelessness,” he said. “The party’s defence that they did not ask for donations is untenable.”

Modi said the money was transferred to the AAP in the “dead of night”.

“Our country can forgive mistakes, but not fraudsters,” the prime minister said.

“Those who roamed around claiming to have Swiss account numbers in their pockets have no idea whose money is lying in their own accounts,” Modi said.

However, Kejriwal, addressing a rally in Trilokpuri in east Delhi, dared the government to arrest him if he was indeed guilty of money laundering.

“I challenge the government to arrest me if they have the courage,” Kejriwal thundered at the rally.

“They don’t have the guts to do that,” he added to loud applause.

“Even my worst critics, who may see a hundred faults in me, have never accused me of financial wrongdoing.”

Kejriwal also wrote to Chief Justice of India H.L. Dattu and urged him to set up a special investigation team to probe funding of his party, the BJP and the Congress for the Delhi elections.

The former Delhi chief minister also wrote to BJP president Amit Shah and Congress president Sonia Gandhi and expressed the hope that they will give their consent for such a probe in the interest of transparency and cleansing of politics.

Kejriwal said in the letter that his party has raised questions about lack of transparency in political funding and its movement was for cleansing politics.

The AAP said it was prepared for de-recognition if the probe comes out with anything incriminating and their leaders were ready to face punishment.

His comments were retweeted nearly 2,000 times and favourited.

AAP leader Kumar Vishwas, at a press conference attended by a panel of prominent party leaders, said the political funding of the BJP and the Congress over the past five years should be probed by a Special Investigation Team (SIT).

BJP leaders, meanwhile, continued their attack on the AAP over the funding issue.

Finance Minister Arun Jaitley said the AAP was caught “red-handed” in receiving funds through “round-tripping” from companies which did not have any business and accused it of adopting “diversionary tactics” to deflect attention.

He termed as a clear case of “round-tripping of black money” the Rs.2 crore donation through cheques of Rs.50 lakh each by four companies to the AAP and indicated that a probe will be initiated by the concerned authorities.

Congress leader Digvijaya Singh said in tweets that he agreed with the AAP that the BJP government should probe allegations of dubious funding.

“I am not a great admirer of (Arvind) Kejriwal but he is right when he challenges BJP to take action against those who have given Rs two crore by cheque,” he tweeted.

“I won’t be surprised if this has been done by BJP dirty tricks department to embarrass AAP. Would Jaitley take action against Donors,” he added.

The Congress, however, slammed the AAP over allegations of dubious funding.

“Are they fighting the polls with money from the common man or from fake companies? The whole truth should come out,” said Congress leader Anand Sharma.

Former Jammu and Kashmir chief minister Omar Abdullah tweeted that the AAP may have been “set up”.

“AAP can’t explain the failure of its due diligence but I have to ask has the party been set up,” Abdullah tweeted.