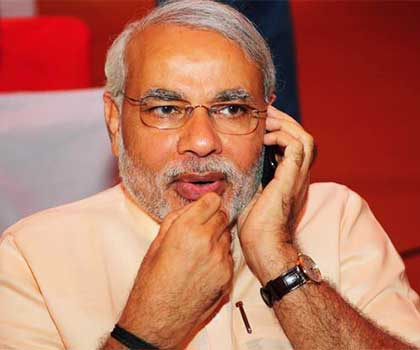 New Delhi, June 16 (IANS) Prime Minister Narendra Modi spoke over telephone to his Pakistan and Bangladesh counterparts, Nawaz Sharif and Sheikh Hasina, and Afghan President Ashran Ghani and conveyed to them good wishes for the Muslim holy month of Ramadan, an official statement said on Tuesday.

In his conversation with Sharif, Modi reiterated his message of “peaceful, friendly and cooperative” relations between the two countries.

Modi’s message came after Pakistani parliament unanimously passed resolutions condemning recent statements made by the Indian leadership, referring to Modi’s statements relating to the 1971 war during his visit to Bangladesh earlier this month and comments of some Indian ministers in the wake of India’s military action along Myanmar border against terror groups.

Sharif had also on June 11 termed statements by the Indian leadership as “irresponsible”.

Talking to Hasina, Modi said his visit to Bangladesh “has set the stage for a new era in bilateral cooperation and regional partnership between the two countries”.

He thanked her for his “successful visit” and “the extraordinary hospitality, friendship and goodwill” that he received from the people and government of Bangladesh.

Modi assured President Ghani of India’s steadfast commitment to support Afghanistan in its efforts to build a peaceful, stable, secure and prosperous nation.

“He (the prime minister) conveyed the good wishes for the holy month of Ramadan to them and their people. He expressed hope for peace, tranquility and harmony in their countries and in the region during this month of piety and prayers,” a Prime Minister’s Office release said.