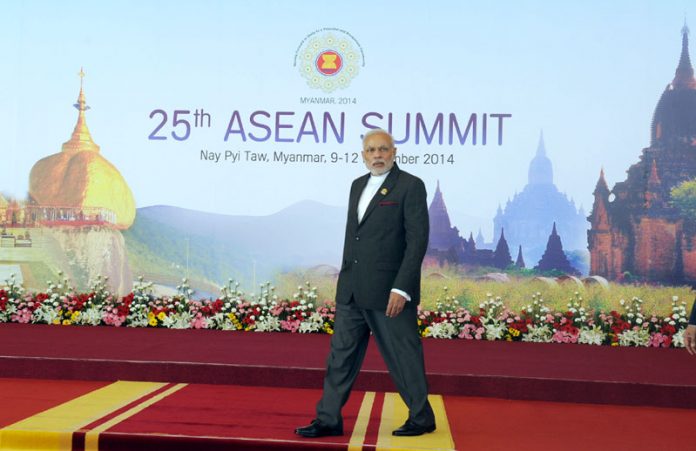 Nay Pyi Taw: Indian Prime Minister Narendra Modi Wednesday met a host of Southeast Asian leaders as he made a major push to increase economic engagement between India and the 10-member ASEAN and said his government places equal emphasis on ease of doing business in India as well as on making policies attractive.

In his separate meetings with the four ASEAN leaders, Modi spoke about the ‘Make in India’ campaign launched to attract business to India and discussed possibilities of economic cooperation with them.

In his maiden speech at the ASEAN-India Summit here, Modi said there will be major improvement in India’s trade policy and environment and his government would move ahead with connectivity projects with ASEAN “with speed”.

“Make in India is a new mission. I invite you to this new environment in India. Indian companies are also keen to invest in and trade with ASEAN,” he said.

He suggested that a review be conducted of the India-ASEAN Free Trade Agreement on goods to improve it further and make it beneficial to all.

Modi appealed that the FTA on Services and Investment, which still awaits inking, “be brought into force at the earliest”.

He said to deepen connectivity with ASEAN, a special purpose vehicle is proposed to be set up to facilitate financing and quick implementation of projects.

He invited the ASEAN block to “come and participate in building India’s 100 smart cities and renewal of 500 cities”.

Modi also said both sides should move quickly towards mutual recognition of degrees, a major stumbling block in the inking of the FTA on goods and services.

Referring to the Regional Comprehensive Economic Partnership Agreement, which is being negotiated, Modi said it can become a springboard for economic integration and prosperity in the region.

He also referred to the issue of maritime trade and passage, a touchy subject especially in context of China’s growing assertiveness over the South China Sea, and said that everyone has the responsibility to follow international law and norms on maritime issues, as is done in the realm of air passage.

“In future, we will also need this in space,” he said.

On the South China Sea, he said that for peace and stability, everyone should follow international norms and law and hoped the Code of Conduct on South China Sea can be concluded soon on the basis of consensus.

At a dinner gala in the evening, Modi and US President Barack Obama shook hands and Obama called him a “man of action”.

He is on a three-nation 10-day visit to Myanmar, Australia and Fiji. He is to attend the East Asia Summit Thursday and also hold a bilateral with Chinese Prime Minister Li Keqiang besides several other meetings on the sidelines with other leaders.

Nestle to resume Maggi production as soon as possible