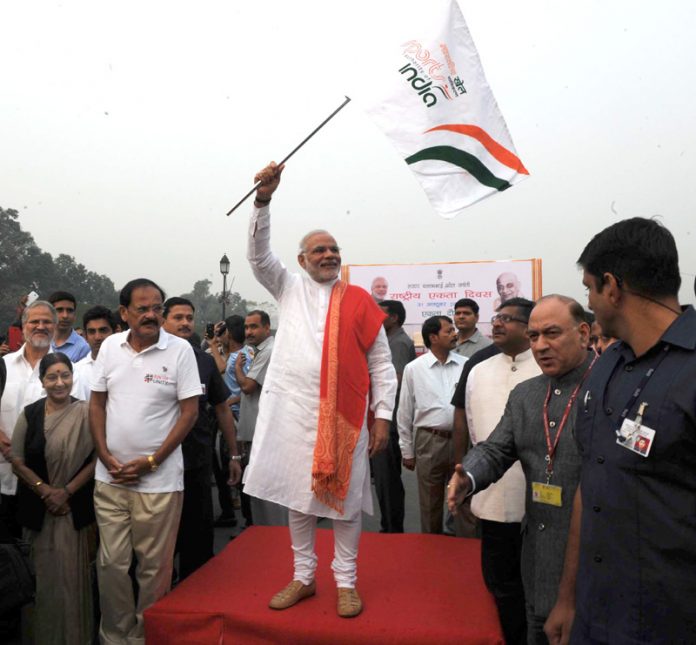 New Delhi: Prime Minister Narendra Modi asked people to build on the legacy of Sardar Vallabhbhai Patel for a “shresth” (great) India at a “Run for Unity”, using the occasion to denounce the Congress over the 1984 anti-Sikh riots.

Just before thousands jogged down the Rajpath up to the India Gate monument nearly two kilometres away, Modi lavished praise on Sardar Patel – “Iron Man of India” — on his birth anniversary — and incidentally the death anniversary of former prime minister Indira Gandhi.

Sardar Patel “gave us one India” which people need to “turn into a shresht Bharat”, Modi said before walking down the boulevard in the heart of the capital along with thousands of mainly young people who virtually mobbed him, creating a scare for the outnumbered security personnel.

Modi referred to Sardar Patel’s key role in integrating princely states after the 1947 independence to build the modern India. Patel, born Oct 31, 1875, was India’s first home minister and, like Modi, from Gujarat.

The prime minister administered a pledge to the gathering, and asked them to embrace the mantra of national unity.

Modi said Oct 31 also marked the death anniversary of Indira Gandhi, who was prime minister for 16 years and who was shot dead on this day in 1984 by two of her Sikh bodyguards, triggering a wave of anti-Sikh violence.

Modi said the riots that left some 3,000 Sikhs dead, mainly in Delhi, was “like a dagger pierced through India’s chest”.

“Our own people were murdered. The attack was not on a particular community but on the entire nation. It was like a dagger pierced through India’s chest.

“It is unfortunate that on the birth anniversary of a man who dedicated his life in uniting the country, a tragic incident took place 30 years ago that shook the country and left it deeply scarred,” Modi said, without naming the Congress party but leaving no one in doubt who his target was.

Dressed in a white kurta pyjama with a red coloured shawl draped on his left shoulder, Modi said India was a country of diversity, a “guldasta” (bunch of flowers).

“Our culture and legacy is of unity in diversity. Let us rise over differences of creed, community, language.”

Naidu said the government’s objective in observing Patel’s anniversary was “to give a balanced account of history to post-independence generation” and not intended to belittle contribution of other leaders.

Modi enthused the crowd with some catchy slogans on India’s unity amid diversity. The crowd roared in joy, cheering and clapping the prime minister and chanting slogans of “Modi! Modi!” and “Bharat Mata ki Jai!”

Security personnel had a tough time keeping people away from Modi when he started walking down the Rajpath.

At one point, the guards looked helpless as hundreds of participants in the Run for Unity collected around Modi. Many clicked his photographs on their mobile phones.

Among the participants in the event were wrestler Sushil Kumar, boxer Vijender Singh and cricketer Gautam Gambhir. There were school and college students as well as government officials.

Many wore T-shirts printed with the slogan “Run for Unity”. The event also took place in other cities.

Earlier, Modi paid floral tributes at the statue of Sardar Patel at Patel Chowk, near parliament, at 7.30 a.m.

When Modi was its chief minister, the Gujarat government decided to build a 182-metre statue of Sardar Patel.