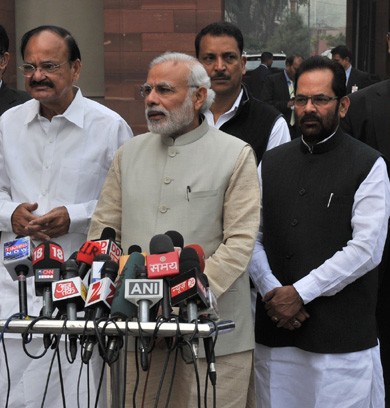 New Delhi, Feb 27 (IANS) Prime Minister Narendra Modi Friday said his government was willing to bend on the controversial land acquisition bill if there was anything anti-farmer, and pledged not to allow any discrimination against any religion.

In a forceful 70-minute speech in the Lok Sabha in which he took on the Congress, Modi justified his foreign visits and called the previous government’s flagship rural job guarantee scheme a “proof” of its failure.

The house adopted the motion of thanks to the president’s address after some amendments moved by the opposition were rejected.

In his reply to the debate on the motion in which about 60 members took part, Modi, point by point, rebutted allegations against him and his government while targeting Congress on issues including black money, the rural job guarantee scheme, coal block allocations and land acquisition law.

On the contentious land bill that has been dubbed “anti-farmer” by opposition, Modi said he was ready to bring about changes. “If there is anything against farmers, the government is ready to change it,” the prime minister said, in a first indication of a change of mindset on the issue.

He dismissed criticism that his government, which took power in May last year, was biased against minorities.

Parliament’s winter session was held up for days over remarks by groups linked to the Bharatiya Janata Party. MPs had then asked Modi to come clean on the subject.

Speaking on the issue in parliament for the first time, Modi said it was his duty not to allow “anaap shanap” (ridiculous) comments in the name of religion.

“Communalism for political reasons has destroyed the country. Hearts have been broken.”

But Modi demanded to know why questions were being “posed to us”.

“We want all religions to prosper. We are for unity in diversity, not uniformity,” he added.

He also referred to his remarks in a rally at Patna last year that both Hindus and Muslims need to battle poverty, not one another.

Tearing into Congress over the Mahatma Gandhi National Rural Employment Guarantee Act, Modi said it was a “living reminder” of the previous government’s “failures”.

“I will ensure it is never discontinued. After so many years of being in power, all you were able to deliver is for a poor man to dig ditches a few days a month,” he said.

“You will give me credit for this at least – that I have some ‘rajnitik sudhbudh’ (political acumen).”

Congress leader Mallikarjun Kharge hit back at Modi. “Speeches don’t fill stomachs,” he said. “MNREGA is a programme from which many people benefit. Making fun of it is not in good humour.”

Modi said his government had compelled the nation to talk about black money. “This,” he said, “is a big thing.”

Congratulating Finance Minister Arun Jaitley for steps taken to curb black money, he said that government will pursue the issue relentlessly “till we are victorious”.

Referring to auctions of coal blocks in his government, Modi said that the loss figure of Rs. 1,86,000 crore mentioned during UPA government appeared to be an understatement.

He also refuted criticism that he paid frequent visits abroad.

“They said you need a visa to come to parliament… I don’t have to say anything but there are things that need to be done at the international level.

Trinamool Congress member Saugata Roy moved an amendment that the president’s address did not mention about the threats posed by “ghar vapsi” programme and attacks on churches. However, it was negatived after a vote.