Modi, who is on a day-long visit to Ireland, in his address to a crowded reception by the Indian diaspora apologised for not being able to give the Indian-origin people more time.

Taking a dig at previous governments for not having visited Ireland earlier, Modi said “There are many who would remember that sometime 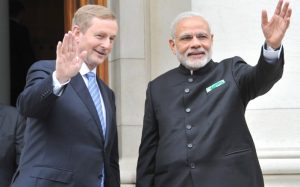 (in the distant past) an Indian prime minister came to Ireland” evoking laughter from the rapturous crowd.

Modi’s visit is the first prime ministerial visit in 59 years.

In a veiled dig at previous Congress-led governments, he said that every year when Indian dignitaries fly to the US, they have to fly via Ireland, implying that earlier the leaders did not bother to visit the country.

“When people have to go from Delhi to New York, they have to fly this way. But your love for me drew me here, and pulled me down from the sky,” he said to loud cries of “Modi, Modi”.

Modi said he spoke at length with Irish Prime Minister Enda Kenny and had a very good meeting and there were many areas of convergence between the two sides.

“I think Ireland-India relations should be mere stronger,” he said.

Modi said that in 2016, when Ireland celebrates the centenary of its independence, India would also participate in the celebrations.

Modi congratulated the Irish children who recited Sanskrit shlokas in his welcome.

In another veiled dig at the opposition, Modi said “I congratulate the children for reciting Sanskrit shlokas. In Ireland, we can do it, but in India if we did this, then so many questions would be raised on secularism issues”, evoking loud laughter.

He said that “now there is a change”, and that people across the world have accepted yoga as a way to healthcare.

“The entire world is following yoga – for holistic healthcare, preventive health care. Now yoga is connected to wellness too.”

In another jibe at previous governments, he said that earlier people while referring to BRICS (Brazil, Russia, India, China, South Africa) would talk of “B,R,C and S, as the ‘I’ (India) had fallen off the map,” he said, evoking titters among the gathering.

Modi said that now the World Bank, the International Monetary Fund were saying that “in BRICS, if there is any one strong factor it is I (India).”

He said all the rating agencies were saying that India is the fastest growing economy in the world, and “if this trend continues, then in another 30 years, there will be no sign of poverty (in India)”.

Modi said India will be able to meet the challenge of keeping the growth rate high, thanks to the strength of its demography of 65 percent of the population aged below 35 years.

He apologised for not having more time to spend with the diaspora.

He later posed for pictures with some of the diaspora members.

Connecting with India’s diaspora is a major focus of Modi’s trips abroad. Ireland has a 26,000-strong Indian community.