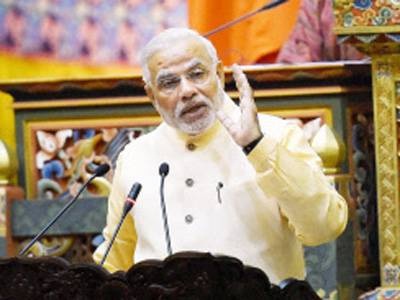 Mahoba (Uttar Pradesh): In his first comments on the controversial issue, Prime Minister Narendra Modi on Monday said the government and society should ensure justice to Muslim women and not let their lives be destroyed by triple talaq.

Modi at the same time also condemned the prevalence of female foeticide in Hindu society.

Addressing a public rally here, Modi said it was not fair for a man to say “talaq” thrice over the phone to ruin a Muslim woman’s life.

“This issue should not be politicised. Female foeticide is a sin. So what if the sinner is a Hindu. He will have to go to jail for such an act. My government has taken a number of steps to stop female foeticide. Religion and sect should not be allowed to come in the way when such matters arise. Daughters, mothers, sisters should be protected. Mothers and sisters should be respected. We have raised the issue firmly,” he said.

“Elections and politics have their own place. But to give justice to Muslim women and that too according to the Constitution is the responsibility of the government and the society.”

The Prime Minister also urged people not to make triple talaq a Hindu-Muslim issue and said it was for this reason that his government has told the Supreme Court that inequality cannot be allowed in the name of religion.

Modi came down heavily on political parties who he said were politicising the issue.

“I am surprised that some political parties want to keep Muslim women bereft of their natural rights in the hunger for vote bank politics and that too in the 21st century. What kind of justice is this?” Modi said.

Modi also asked the gathering whether Muslim sisters deserved equal rights or not. “Should they get justice or not. Should they be defended or not?” he asked.

“There must be a debate among those experts from the Muslim community who are either in favour of it or in opposition to triple talaq,” he added.

Modi’s comments come as the All India Muslim Personal Law Board (AIMPLB) has said it will continue to defend triple talaq and some Muslim clerics have voiced unhappiness at the government’s move over the issue.

Air India to fly over Saudi Arabia for Israel: Netanyahu