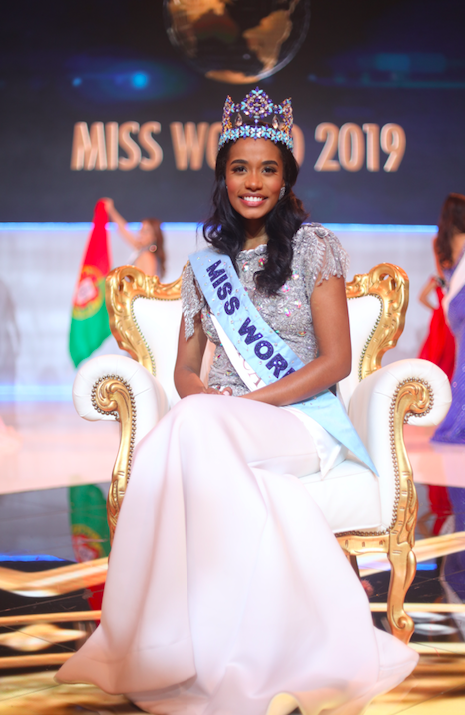 London: On Saturday, at ExCel London Toni-Ann Singh aged 23 has been crowned the 69th Miss World by her predecessor Vanessa Ponce de Leon at the grand final hosted by Peter Andre and Megan Young.

A tearful newly crowned Miss World 2019 said: “So honored and grateful for this opportunity but most of all I’m thinking about the work that needs to be done and that I have the platform and the means to do it. I’m ready to get out there and work. I’m excited!”

Toni is a women’s studies and psychology student at Florida State University who aspires to be a medical doctor. Previously she has worked as president of the Caribbean students association on campus. In her free time Toni enjoys singing, cooking, vlogging, volunteering and singing. Her special talent is that she can sing classical opera. The most important thing in Toni’s life is her mother who has facilitated her dream by supporting her in every way possible.

Lulu, one of Britain’s most iconic singers, with an internationally renowned voice performed a very festive ‘Run Rudolph Run and closed the show performing ‘Shout’, The show opened with Kerry Ellis, a West End and Broadway star singing ‘Rise Like A Phoenix’ with other performances by Andre singing ‘Mysterious Girl’ and Misunderstood, an all-singing all-dancing duo from South London who performed ‘Girls in London’ with the final 12 contestants.

UK broadcaster and TV celebrity Piers Morgan asked the final five contestants their last question before the judges had to decide who would wear the famous blue crown. Celebrating the icon theme, Zandra Rhodes was one of the judges.

Miss World France, Ophely Mezino was the runner up, and Miss World India, Suman Rao was placed third after the culmination of a month-long Miss World Festival that saw contestants from 111 countries competing in a number of fast track challenges.

What is Lead Generation and why is it Important to your...