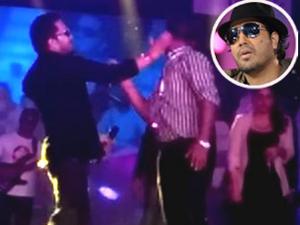 “We have arrested the singer. He was accused of assaulting a doctor during a live musical concert in April,” a Delhi Police officer told IANS.

Mika, the brother of popular singer Daler Mehndi, was released on bail some hours later.

Delhi Police spokesperson Rajan Bhagat said Mika was released on bail as he faced charges which come in the category of bailable offences.

A first information report was registered against Mika for slapping the doctor during a performance here on April 11.

Mika said the incident followed a rude gesture by Shrikant, after the singer had asked him not to stand among women. Mika claimed the doctor was drunk and did not listen to him.

Police registered a case of causing hurt and wrongful restraint against the singer.

The victim, Shrikant, an ophthalmologist at Ambedkar Hospital, reportedly suffered internal injury in his left ear due to the assault.

The incident occurred at a concert organised by the Delhi Ophthalmological Society as a part of its three-day conference being held at Inder Puri in west Delhi.