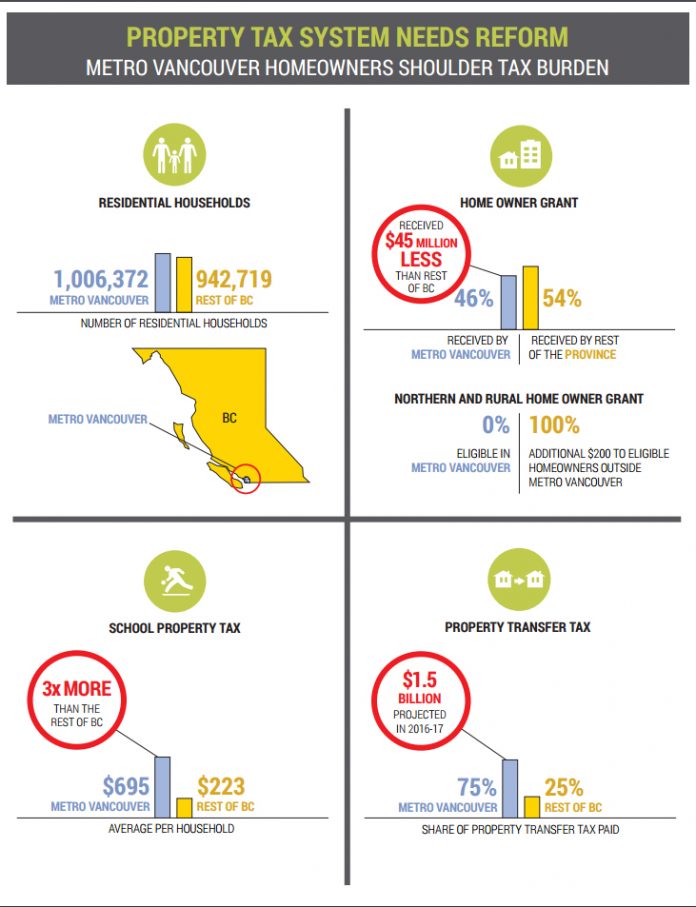 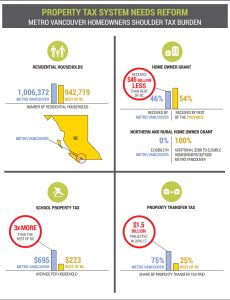 Metro Vancouver is calling on the four main provincial parties to commit to implement substantial changes to the B.C. Home Owner Grant, Property Transfer Tax and School Property Tax to ensure property taxation is fairer and more equitable for residents and businesses across the region.

The recommendation follows a Metro Vancouver-commissioned independent analysis, “Provincial Property-Based Taxes in the Metro Vancouver Regional District,” by Cascadia Partners, which found regional homeowners pay a disproportionate share of property taxes – compared with the rest of B.C. – because of an antiquated property tax system that pegs taxes to property assessments.

“Metro Vancouver residents are facing an inequitable tax burden because of an antiquated taxation system based on assessed property values,” said Metro Vancouver Board Chair Greg Moore. “It’s patently unfair for more than half of B.C.’s population to be financially penalized when many residents are struggling to afford to remain in their homes.”

Higher property assessments throughout Metro Vancouver are not reflective of the homeowner’s ability to pay, and property taxes do not rise or fall in direct correlation to assessed values. Instead, rates vary each year depending on growth of assessed value across property classes.

“If school expenditures kept pace with revenue, education spending would have increased by $290 million per year, while we could also use the revenue from Property Transfer Tax to address affordable housing and the homelessness crisis we’re facing right now,” said Metro Vancouver Vice-Chair Raymond Louie. “The system needs an urgent overhaul.”

Metro Vancouver is recommending B.C.’s four main political parties commit to implement the following measures to achieve fairness in property taxation throughout the province, specifically in the areas of Home Owner Grant eligibility, the outdated Property Transfer Tax brackets and application of the School Property Tax:

10 killed in US college shooting