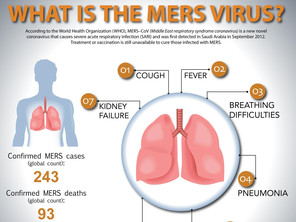 Abu Dhabi, June 19 (IANS) A MERS patient died in the capital of the United Arab Emirates, while another was discovered to be infected with the virus, a media report said.

The local health authority here said the patient, who died on Thursday, was a 65-year-old UAE national, while the other, whose nationality was not released, remains under observation, Xinhua reported, citing the local WAM news agency.

It added that the newly-infected remain under observation and isolation in line with the international standards and recommendations from the World Health Organization.

MERS, or Middle East respiratory syndrome, was first discovered in 2012 when a Saudi patient died in London.

MERS coronavirus disease is caused by a virus. Typical symptoms include fever, cough and shortness of breath. Pneumonia is common, but not always present. Gastrointestinal symptoms, including diarrhoea, have also been reported.

The health ministry said the situation is closely monitored to ensure the health and safety of residents as well as visitors to the Gulf state.

In South Korea, the total infections have reached 165 as of Thursday since the first case in the country was discovered on May 20. The toll stands at 23.