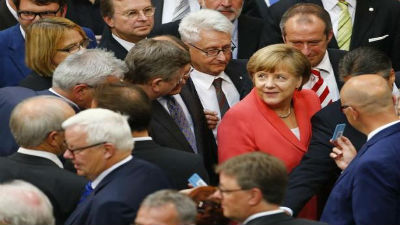 Athens, Aug 18 (IANS) A German parliamentary vote on the controversial third Greek bailout on Wednesday has been overshadowed by an expected rebellion in Chancellor Angela Merkel’s centre-right party.

The Christian Democrats (CDU) and their Bavarian CSU allies were divided over the $95 billion bailout, BBC reported.

Some lawmakers suspected that part of the Greek debt would be written off a “haircut”, which could hit EU taxpayers.

They also want an assurance that the IMF would contribute to the bailout.

The rebellion in the Bundestag (lower house) on Wednesday could rise to 100 lawmakers, German commentators said, a third of the total in Merkel’s bloc. That could weaken her authority nationally.

But a majority was still expected to pass the Greek bailout, as the Social Democrats (SPD) and Greens want it to go ahead.

Winnipeg woman accused in infant remains case had at least 10...