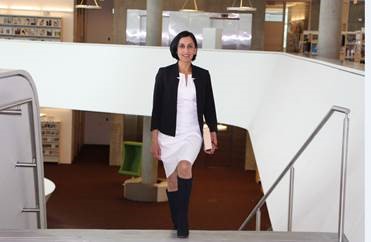 Surrey: After a nation-wide search, the Surrey Libraries Board of Trustees is pleased to announce the appointment of Surinder Bhogal as the next Chief Librarian.

“We are extremely pleased to have someone of Surinder Bhogal’s calibre as the new Chief Librarian,” says Library Board Chair, Upkar Tatlay. “She will bring significant strengths to the role, including a deep a commitment to Surrey Libraries, a passion for improving literacy, as well as a strong understanding of upcoming opportunities and challenges and the important role that Surrey Libraries plays in the City of Surrey.”

Bhogal, currently Deputy Chief Librarian, brings a lengthy record of success in various roles with Surrey Libraries, earning her high regard in community outreach and partnership building.  She has worked for the Surrey Libraries as a Branch Manager in the City Centre, Strawberry Hill, and Whalley Libraries; and as the Manager of Information Services at Guildford Library.  She was instrumental in the planning and opening of both Strawberry Hill and City Centre Libraries.  Bhogal first joined Surrey Libraries in September 1997, while working in several Lower Mainland libraries. She also served as a business librarian at the Vancouver Public Library.  She has her Master of Arts – Library and Information Studies from University College London, England and her Bachelor of Science in Management from the University of Manchester. Bhogal begins her new role on July 4th, 2016.

US pulling out all stops for Indian Prime Minister Modi