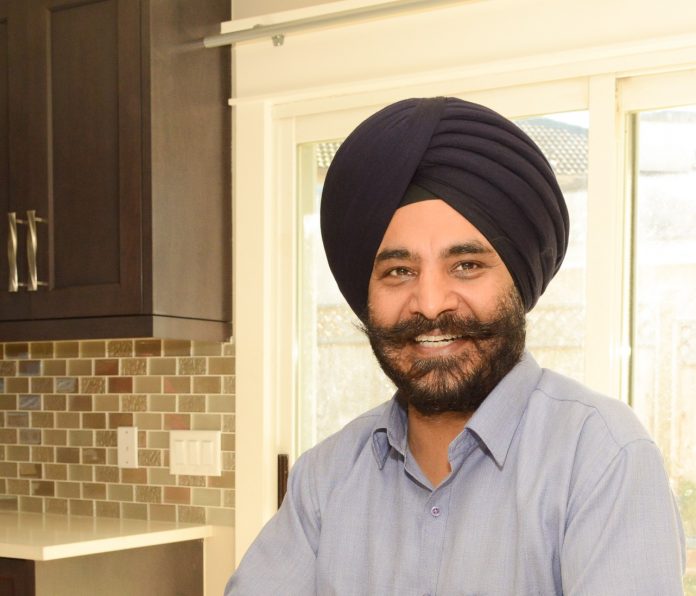 Harpreet Singh, a 23 year career journalist, says he has spent the best part of his life creating awareness “amongst the people.” But in explaining why he has made the jump to politics, he said that he now feels the need to participate in changing policies and to bring people’s concerns, challenges and issues to the public arena and to work on solutions. Ray Hudson asked what he felt were the top issues of concern to this riding.

HS: The major thing on the minds of the people is crime. The increasing numbers of violent events are leaving people feeling afraid. The second concern coming from that is a fear for their children going into drugs and increasing gang violence. People are even talking about leaving Newton. That has to change.
The government has proposed many changes in legislation, but unfortunately they are not having the desired impact because the laws need to be changed. For example, a police officer arrests a suspect who goes before a judge. He gets released and comes back to do the crime again. It’s a cat and mouse game being played. Yes, individual rights are great, but what about the collective rights of people? This is an area where I feel that this government is doing a good job. It’s one of the reasons I support the policies of the Conservative government.
I’m finding that people are frustrated with the politicians. I have always been a very blunt person, an open person. The people I talk to say they’re not happy with their politicians because they come and make statements and go. In Surrey Newton, they say they haven’t seen anyone come and talk to them about issues. To deal with that, once elected, I will divide this riding into four parts, and every two months hold town hall meetings where common people can come and share their views, a place where the entire community can participate in developing solutions.

AJ: What are the other major issues at the national level?

HS: People are concerned about jobs and the economy, and in Surrey I feel there’s a lot of scope where we can get the government involved and get some good businesses here. Surrey is developing at a fast pace with 1000, to 1,200 people per month coming here. We need more businesses here.

AJ: What do you see the federal government’s role in doing that?

HS: With the involvement for example, of the Surrey Board of Trade, the government has good policies for business such as the lowest tax structure for businesses. With the involvement of the civic authorities and the people, we can attract business here by providing a better business climate. That way the government of Canada can play its role with their economic action plan. That is how we can influence business to come over here. Also in Surrey there’s a lot of less expensive space compared to Vancouver, which makes Surrey more attractive.
The job of a member of parliament is not just to give speeches. I feel that people are losing faith in the democratic structure. It’s not good enough that once every four years you go and talk to them with big promises. I feel that people need to be involved on every front, but I’m seeing there is a big gap. When I’m door knocking and meeting people, especially the youngsters, I’m finding they’re not at all interested. I feel that unless we involve our youth in further democratic issues, it’s not going in the right direction.

AJ: How do you see getting the youth interested?

HS: It’s a world of social media today, and that’s where more emphasis needs to be put on connecting with young people. We need to get them involved, find out what they are interested in, and find out why they aren’t taking an interest in the issues of society. It’s not going to be easy, but by constantly communicating with them and involving them in dialogue we can slowly make progress. Youngsters are idealistic, but I think when idealism and realism come together, I feel we can come up with some good solutions by having a constant dialogue with them.

HS: I fully support Bill C51 because it’s not an attack on any individual freedom or rights of people, because the judicial review is still there. While the opposition is demanding parliamentary oversight, judicial oversight is already there. The opposition is saying that you cannot go and protest; for example, someone who is concerned about the environment cannot stand and protest. That’s not correct. It’s only those people who have espionage, or not the interests of Canada, in their mind. They’re the ones who are being looked into. I am a proud Sikh. When I go to the airport, and someone touches my turban when I go on the plane, I should not mind it because the lives of three hundred people are involved. I respect individual and religious rights and freedoms, but when it involves collective rights we all need to submit to something. Today the major threat all over the world is terrorism. Only the Conservative government has taken a strong stand on it.
When our parliament was attacked, the leader of one opposition party said, that it was not a terrorist attack. The RCMP Commissioner said it was a terrorist attack, and when the film of the attacker was released, we heard what he planned to do: kill the infidels and all that. When the integrity and security of Canada is concerned, we should have a single approach because the safety and security of our citizens is foremost, irrespective of party affiliation. So Bill C51 is the right thing because RCMP and CSIS need spies to keep an eye on those disgruntled elements who do not have the interests of Canada in mind. Canada’s interests are foremost, everything else is secondary.

AJ: What experience would you bring to being a member of parliament? Your main opponents in Newton include the incumbent MP and the former MP?

HS: It’s interesting, the MP says that nothing has been done regarding violence in Surrey yet bills were being passed in the parliament to make our communities and streets safer including; increased penalties for sexual offences against children; tougher sentences for the production and trafficking of illicit drugs; better protection from violent and repeat offenders; eliminating conditional sentences and house arrest for serious and violent crimes. When these bills were passed the opposition voted against them. That is why I feel people are not happy with politicians, and as far as experience is concerned, I have more experience than them because (as a journalist) I have been dealing with all kinds of people, all kinds of issues, and I am the only candidate who lives in the Surrey Newton riding.