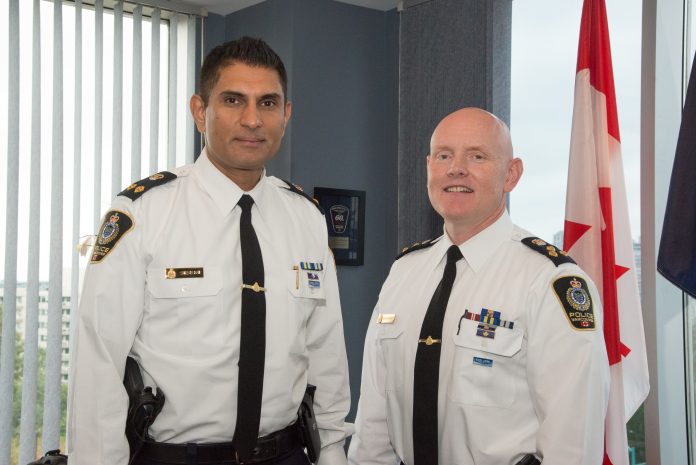 Vancouver: The swearing-in of Adam Palmer, as Vancouver’s Police Chief, brings an environment of continuity to the Vancouver Police Department as both their leader and the new Deputy Chief, Steve Rai are career VPD officers. They both met with Ray Hudson of the Asian Journal for an in-depth interview to introduce them to the readers and hear their plans for the next chapter in one of the country’s top police forces. This week we meet Chief Palmer, next week, Deputy Chief Steve Rai, and in week three of this series we talk about the diversity of a police force in Canada’s most diverse city, the question of a regional police force, and the next great policing challenge (upon us now), the role in policing and mental health.

Asian Journal: Many kids say they want to be police officers or firefighters. How did it become real for you?

Adam Palmer: I was interested in policing since I was five or six years old. My dad was a small businessman in New Westminster, and I remember a beat cop who would drop into his store on Columbia Street. He was a larger than life guy and made quite an impression on me. Dad had a couple of other friends who were police officers and it seemed like an exciting job. The interest stayed as I grew older and went to high school, and on into Simon Fraser University, and it was at that time I decided to join the Vancouver Police Reserves, and stayed active all the time I was going to university. We could be directing traffic out at the PNE or for other special events, and we could also be riding with the officers. I got a good taste of the Vancouver Police Department and realized the variety of experience that’s available in policing. I liked policing, I thought it was exciting, and I always liked the fact that when you come to work you never know what to expect, no two days are the same. It’s always a new adventure. And that’s the way it feels even to this day. I wake up and pinch myself, happy to be doing it. Wouldn’t want to do anything else.

Asian Journal: What have been some of the most satisfying moments or highlights of your career?

Adam Palmer: I worked as a patrol officer in east Vancouver for thirteen years, and that was one of the highlights of my career. I’ve often said this to other people, that when you’re early on in your career, doing your patrol in your early years, you realize, when you look back, it was actually some of the best times of your life. I had the same partner, Glen Thordarson, for 10 years, which is highly unusual. He’s still with the department. We were actually in the same academy class. So that was unusual as well to be partnered up, within a year of coming out of the Academy.

At the time, southeast Vancouver, Kingsway, Mount Pleasant was a very dynamic area, lots of stuff going on in the late eighties and throughout the nineties. It was a busy time in policing, and when we look back over crime trends, the nineties was actually the busiest period for the Vancouver Police Department for call-out. I worked on patrol and loved it.

Another highlight was working in gang squads. After patrol I worked in Gang Crime for four years. Anything to do with gangs and organized crime fascinated me, and when I was with that unit I was seconded to the Combined Forces Special Enforcement Unit (CFSEU) previously called the Organized Crime Agency of BC. I loved working on high-level organized crime files, wire tap, uncover operations, surveillance and all that, working on serious gangsters, committing the most serious crimes, homicides, attempted murders, extortions, robberies and so on. Going after those types of crime figures was very satisfying.

The next big thing for me was being promoted to Inspector and becoming the District Two Commander, which included the Downtown Eastside, basically everything from Victory Square out to Burnaby. I had a great group of officers working with me there, including all the beat officers in the Downtown Eastside, where I got to know all of the community groups. Again, a really dynamic area of policing, but it brought me back in to that operational realm of frontline policing which I was so passionate about, particularly meeting the public.

The Olympics was another highlight because I was seconded as a Commander from the latter part of 2009 and 2010. I was seconded to the RCMP and the integrated security units, responsible for   the Pacific Coliseum, which was short track speed skating and figure skating. I was the only VPD officer there, but I worked as Commander with police officers from all across Canada. There was a total of 500 personnel at that venue, about 350 security and 150 police officers for that site. It was a fantastic experience, going into the Olympics, going through the planning stages. I think all of us were looking at it as another big event – it’s all business. But when they cut the ribbon and lit the torch, and the games were on, that whole sense of the Olympics and the excitement of it all, it was tremendous. I didn’t want it to be over. It was anti-climactic when we were shutting down the command post. We were feeling, I don’t want this to end it’s been such a good ride. I really enjoyed it.

When I started there was a real focus on the black and white enforcement of laws. As you go on, and the way policing has evolved, especially in the VPD over the years, we’re now so involved in the social issues of policing. Officers have always dealt with these issues but things like mental health, homelessness, addiction, poverty, youth issues, all those social issues that are either precursors or issues related to crime that impact it. The fact that we are dealing with so many of these issues is satisfying because we’re dealing with youth with mental health issues before they get involved in criminal behaviour, and some of the programs we have going now are just so rewarding because they’re preventative and you’re making a difference in so many people’s lives.

I think the recurring theme has been that all my assignments have been enjoyable. No matter where I’ve been, I’d call it a great ride so far.