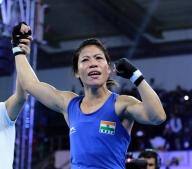 Sonia went down 1:4 by split decision to Germany’s Ornella Gabriele Wahner in the 57 kg featherweight category on Saturday.

Sonia’s bout looked a one-sided affair in favour of the German, who came in with a flurry of punches towards the end of the opening round to dominate the proceedings.

It was always going to be a tough outing for the debutant Indian, who failed to use her taller height as an advantage as the German began on an attacking note, with a few left-and-right combos before pinning Sonia to the corner of the ring more than once to end with a few left-handed jabs.

With the tie already slipping out of her grasp, the third round was a do-or-die for the Indian, who was shaken up by a jab on her nose and then a right hook as the German continued her flurry of punches to end on a victorious note.

Sonia’s silver brought India’s campaign at the World Championship to an end with the hosts ending with 1 gold, 1 silver and 2 bronze.

The 35-year-old Mary, a mother of three and a pre-tournament favourite for the gold, rewrote the record books when she eclipsed her joint haul of five golds with Katie Taylor of Ireland.

Welcomed by thunderous chants of “Mary Mary” at the jampacked K.D. Jadhav hall, the Indian took the ring with a statistical and psychological advantage over her Ukrainian opponent, whom she recently beat at the Silesian Women’s Open semi-finals in Poland.

Living up to the reputation, Mary started the opening round aggressively and landed a couple of right jabs quite early into the round before taking full control with a right-two punch combination to Hanna.

However, towards the end of the first round, the Ukrainian managed to get a shot at Mary’s face before the Indian wrestled Okhota to the ground. Mary appeared unshakable throughout and ended the round with a few jabs and a right-hand, left-hand combo.

The Indian came back with more aggression in the second round, and started with a powerful hook with her right and then doubled the attack with two quick right jabs to leave her opponent rattled.

A left-handed flick from Okhota pushed Mary backwards but towards the end of the round, the Indian delivered a perfect right hook to inch closer to another gold.

The third and decisive round began with the Manipuri pugilist delivering a right-handed jab, and following it up with a right-hand, left-hand combo that completely demoralised Okhota.

Mary then sealed the gold in her favour with another combination of punches, and a few shots at Okhota’s face leading the crowd to erupt in joy when the referees announced the unanimous 5:0 verdict in the Indian’s favour.