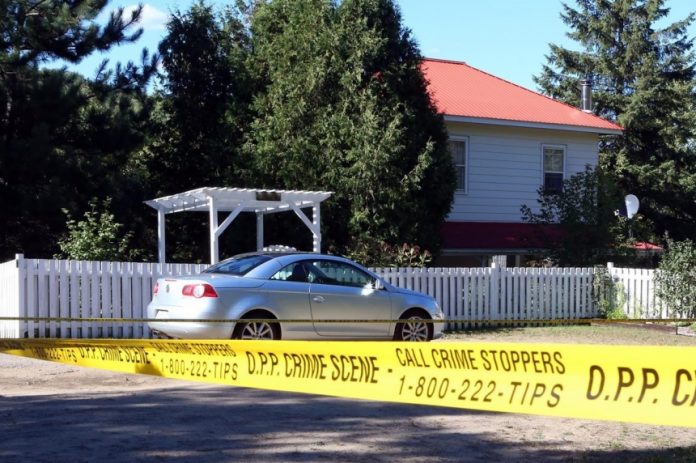 Wilno, Ontario: A shooting in a small eastern Ontario community Tuesday morning triggered a manhunt that ended hours later with the arrest of a man police consider a suspect in the deaths of three women.

The 57-year-old man, who authorities have not named pending charges, was arrested by police in Ottawa hours after officers were first called to a home in Wilno, Ont., some 130 kilometres west of the country’s capital.

The day’s events left residents of the small town of about 300 people in shock.

“This is slaughter,” Carl Bromwich, a councillor for the township said of the three deaths being investigated by police. “This is the most unnerving thing that’s happened here in years.”

Bromwich said he spoke to a Wilno resident who told him she had seen a man thought to be the suspect earlier on Tuesday.

“She said, ‘oh my god, I saw that man running down the road with a gun,”’ Bromwich said.

Police had initially said the man was being sought in connection with one fatal shooting.

Later in the day, however, police provided details on how events had unfolded.

Shortly after 11:10 a.m., police say they found a third woman dead at a home about half an hour away from Wilno.

Several businesses and schools in Wilno were placed on lockdown while the search for the suspect was underway. Extra security measures were also taken on and around Parliament Hill in Ottawa, as police announced the suspect may have headed to the city.

The man was arrested around 2:30 p.m. in the community of Kinburn, in western Ottawa.

Sgt. Kristine Rae of the Bancroft detachment of the OPP thanked the public and Ottawa police for their assistance in the case.

“Events like this are not very common and it just shows the teamwork between police services,” she said. “It took a lot of teamwork, a lot of officers and investigators. We’re just happy that the suspect has been apprehended.”

In Wilno, residents expressed relief that the suspect was in custody, recalling a flurry of police activity in the town earlier in the day.

Sara Burchat was home alone when police advised her that there was a male suspect on the loose near her property. Burchat said her husband was trying to return to be with her, but had been kept away by road closures as the police investigated the scene.

“The cop was on the other end of the phone saying, ‘you either hide or get out.’ So I had to leave,” Burchat said from the local tavern.

Corinne Higgins, owner of the Wilno Tavern Restaurant said it had been a very stressful day.

“It was a very scary situation to think that somebody was armed in our community,” she said. “Knowing that the person has been arrested, it’s a relief.

_ With files from Diana Mehta and Liam Casey.

MacKay’s colourful presence on the Hill comes to an end, for...