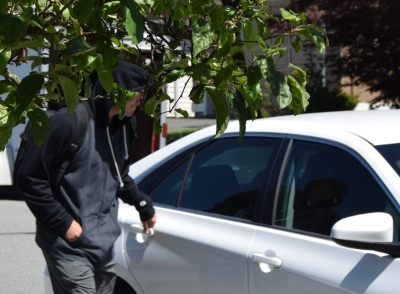 Delta: A 46-year-old man is facing a charge of theft under $5,000 after Delta Police investigated a Bait Car activation earlier this summer.

As thefts from vehicles are an ongoing issue in Delta, The Delta Police participates in the Integrated Municipal Provincial Auto Crime Team (IMPACT) program. That program offers a wide selection of bait cars, which can also feature “bait” items – typically commonly stolen goods such as wallets or purses, sunglasses, electronics, tools and backpacks. Vehicles are outfitted with hidden video and audio, in order to collect evidence.

On August 17, shortly after midnight, Delta Police received an alert about an activation in the area of 89A and 118 Street.

An officer attended and confirmed that tools had been stolen out of the bait vehicle, while other officers began conducting patrols to locate the man matching the description of the suspect. A man allegedly carrying tools believed to be removed from the bait car was located nearby around 1 a.m., and arrested without incident.

Robin Roy Mack, age 46, of Surrey, BC, is facing one count of theft under $5,000. He is considered to be a prolific property crime offender.

IMPACT manages the largest Bait Car fleet in North America, and encourages vehicle owners to “check your doors before they do” and remove all valuables and personal items.

The public is asked to report ALL thefts and attempted thefts from vehicles. “If you suspect a thief has entered your vehicle and stolen small change, or just rummaged through your belongings, you are encouraged to report this to police, in case evidence from your file can be tied to a more significant crime, or lead to an arrest,” says Cris Leykauf, spokesperson for Delta Police.