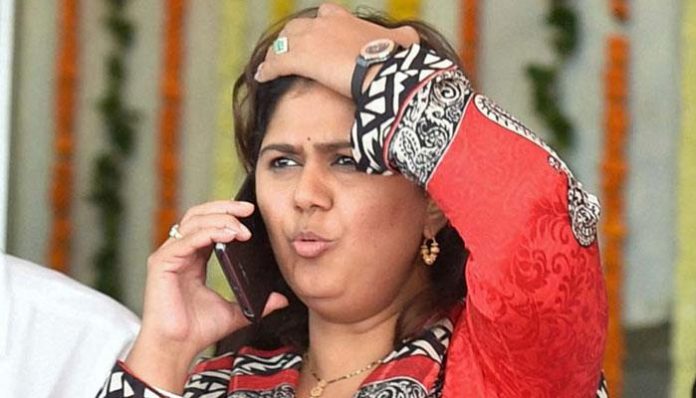 Mumbai, June 24 (IANS) Maharashtra’s Women and Child Development Minister Pankaja Munde was on Wednesday embroiled in a controversy involving alleged irregularities in awarding contracts worth Rs.206 crore (Rs.2.06 billion) with the Congress demanding a CBI probe in the matter.

The minister — daughter of union minister Gopinath Munde who died in a road accident in New Delhi last year — is accused of doling out the multi-crore-rupee contracts through multiple Government Resolutions (GRs) on a single day (February 13) instead of adopting the e-tendering or tender route.

Among the allegations against Munde are irregularities in awarding contracts for workbooks for students, water filters, growth monitoring machines for malnourished kids, medicines and ‘chikkis’ (sweets cookies with nuts and dry fruits in a jaggery base).

Presently in the US, Munde rubbished all allegations in an email statement and claimed that some of her dynamic decisions as minister to reduce corruption have upset some “money-minded bunch of people”.

“I have not broken any rules, as far as I am concerned… I also do not fear any allegations. I’m here to do the best for those kids and women and I will do it,” Munde said.

Not satisfied with the explanation, Maharashtra Congress spokesperson Sachin Sawant lodged a formal complaint with the state Anti-Corruption Bureau demanding a probe into the allegations against Munde.

Former chief minister Prithviraj Chavan termed the matter as serious and urged the government to hand it over to the Central Bureau of Investigation for a probe.

As per the state government’s norms set in December 2014, e-tendering is a must for all contracts in excess of Rs.3 lakh and in cases where the rates were fixed, e-tendering was mandatory for contracts worth Rs.1 crore since April this year.

A clarification issued by her department said the purchases were made under the rates approved by the central government’s director general of supplies and disposals.

The note also said that in view of the approved rates, there was no need for e-tendering and although e-tendering was a must since April for all such contract exceeding Rs.1 crore, the contracts in question were awarded during the previous financial year (2014-2015).

Among the irregularities Munde is accused of are a contract to a Navi Mumbai-based firm for students’ workbooks worth Rs.5.6 crore with the cheque issued to its proprietor in his personal capacity, and an approval to purchase water filters from a Nashik-based company at Rs.4,500 per unit — but Munde allegedly hiked the cost to Rs.5,200 per unit, although the company had no manufacturing facilities and was to outsource the product, violating government norms.

Besides, two separate orders were issued to purchase growth monitoring machines, used to weigh undernourished kids, and awarded to two separate parties at a cost of Rs.18 crore and Rs.6 crore, respectively, and approval of a medical kit at Rs.720 per unit — but since the provision was for only Rs.500 per kit, the supplier was allegedly permitted to reduce the number of medicines in the kit to keep it within the limit.

The last one was a contract to purchase ‘chikkis’ from a women’s NGO based in Sindhudurg at a cost of Rs.37 crore, which was allegedly hiked by Munde to Rs.75 crore, though the NGOs manufacturing facilities were not ascertained.

Referring to this, the departmental statement said that contrary to media reports (not IANS), the contract was not for ‘chikkis’ worth Rs.114 crore but Rs.52 crore and Rs.23 crore for two different varieties.

Another Rs.41 crore has been directly disbursed in advance to the ‘aanganwadis’ for buying eggs and bananas for children.

There has been no reaction from Chief Minister Devendra Fadnavis on the allegations clouding his cabinet colleague, though some minister have defended Munde who was once a chief ministerial candidate.