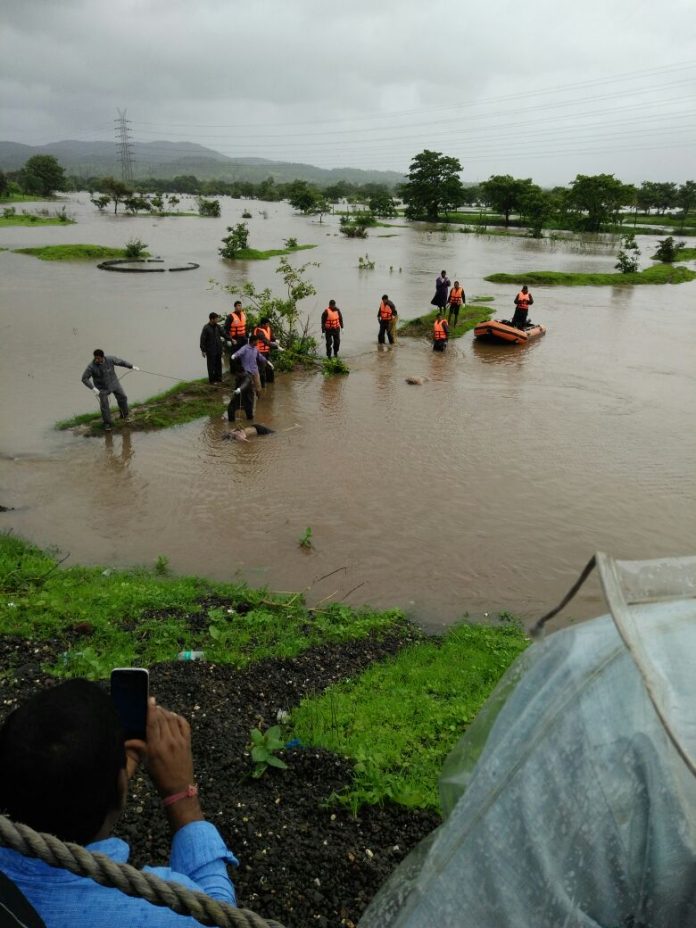 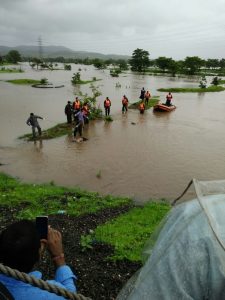 Raigad (Maharashtra): least two buses with 22 people and four to five private vehicles were washed away early on Wednesday in flood waters after a British-era bridge collapsed on the Mumbai-Goa highway, authorities said.

Till late evening there was no trace of either the Maharashtra State Road Transport Corp buses or the other vehicles after they plunged into the swollen Savitri river in Raigad district, officials said.

Two bodies were found amid fears that all the vehicles may have been washed away to the Arabian Sea in the coastal Konkan region.

Because the buses were plying at night, they carried only 11 people each, Raigad Collector Sheetal Ugale said. Both buses were headed to Mumbai.

One started from Jaigad, driven by S.S. Kamble with V.K. Desai as the conductor. The other set off from Rajapur with E.S. Munde at its wheels and P.B. Shirke as its conductor.

In the afternoon, Munde’s bag and tiffin box were recovered a short distance away from the tragedy site.

The disaster struck after heavy rains flooded the Savitri river, which originates in Mahabaleshwar and flows through Ratnagiri-Raigad districts.

The sheer force of the flood waters built up huge pressure on the seven-decade-old bridge near Mahad around midnight and it collapsed, with around a dozen piers totally washed out by the gushing waters.

“The bridge was built during the British era,” Ugale said. Traffic on the route has been diverted to a new parallel bridge nearby.

By late afternoon, grieving relatives of the passengers on the two buses and one of the private vehicles reached Mahad and anxiously waited for information about the fate of their kin.

Stunned by the tragedy, MSRDC Minister Eknath Shinde ordered a structural safety audit of all bridges on the busy and treacherous Mumbai-Goa highway, especially in view of the 10-day Ganeshotsav next month.

Fadnavis, his ministers and opposition leader Radhakrishna Vikhe-Patil rushed to the spot.

Raigad Collector Ugale and Superintendent of Police Suvez Haque monitored the rescue operations. Fadnavis announced a probe into the incident.

The tragedy found its echo in Parliament and the Maharashtra assembly where several opposition leaders attacked the government for not shutting down the old bridge though it had exceeded its lifespan.