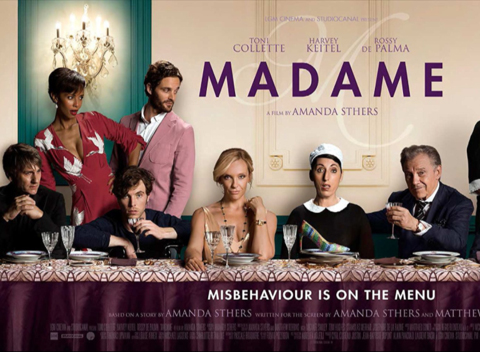 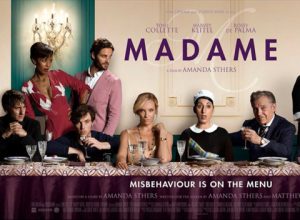 Guess Who’s Coming to Dinner? Golden oldies may recall that was the name of a sort of ground-breaking movie about race relations back in the 1960s featuring acting legends Spencer Tracy, Sidney Poitier and Katherine Hepburn. That name may well describe the antics in the wacky semi dark comedy Madam. Consider this fish out of water sentimental laugher from PNP Pictures to motivate mature audiences to drop in at the International Village Cinemas and select Cineplex Cites around B.C.

Flashy France, Paris to be precise is the setting for Madame Lifestyles of the Rich and Famous would feel right at home as an upscale couple play host to a collection of high class people from the walks of industry, government  and politics along with the attached jaded celebrity, traditional tough guy Harvey Keitel (Pulp Fiction) lets his nice guy persona shine through as Bob Fredericks, a foxy geriatric once upon a time macho guy now wrestling with age issues along with his energetic compelling  wife Anne played with zeal by Toni Collette.

Ah, the lady likes to entertain. Gasp with disbelief as a dinner party at their palatial residence takes a comical turn and not necessarily for the best when Maria, a lowly maid is asked to “sit” in for a no-show guest. So now we have the comical force of an out of her league low brow trying to make time with the high brows. Unpredictable consequences ensue with the whole household turned upside down as this dinner pairing turns into a tidal wave of jealousies and hurt feelings.

Expect for a rather different out of place in my mind ending Madame works as a light weight romantic affair that also shows how careful you need to be with judging people or trying to do the right thing. In particular Rossy de Palma does a fine job as a Maid out of her depth with a heart ripe for the picking. Fruits of that romantic bliss are thrown for a loop with insight into human motivations and personal relationships meaningfully revealed and explored. Director/screenwriter Amanda Sthers comes through.