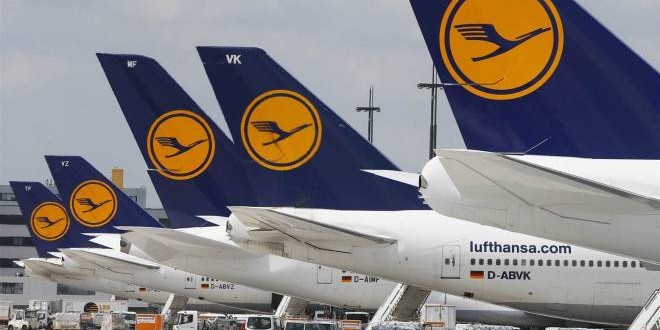 Berlin, Sep 9 (IANS) German airline Lufthansa said on Tuesday that it will cancel about 1,000 flights, including 52 long-haul flights, on Wednesday due to a strike of its pilots.

Lufthansa said it will only be able operate 500 out of the 1520 planned flights on Wednesday due to the pilots’ strike which started on Tuesday with long-haul flights and will extend to short and medium-haul service on Wednesday. Around 140,000 travellers will be affected, Xinhua reported.

The company said all flights of its subsidiaries, Germanwings, Swiss, Austrian Airlines and Brussels Airlines, will operate normally.

On Tuesday, the airline had to cancel 84 of the 170 scheduled long-haul flights from and to Frankfurt, Munich or Duesseldorf when pilots started their 13th walkout since April 2014.

The latest industrial action was announced on Monday by the pilots’ union Vereinigung Cockpit (VC) after a recent negotiations over a long-lasting dispute over retirement scheme and benefits failed last week.

Lufthansa, facing competition from budget airlines, was struggling to cut its operating costs. It wishes to scrap a retirement arrangement under which pilots could retire at 55 and receive 60 percent of their salary until they reach the statutory retirement age of 65.

The repeated strikes have cost the company over about $335.5 million. On Tuesday, Lufthansa said it will claim a compensation from the union for a damage of 60 million euros caused by a cargo flights pilots’ strike in April 2014 when the wage contract with pilots was still in force.

“With the strike plans outlined by the VC for the time between now and the end of this year, the financial damage to our company would exceed 100,000 euros per pilot,” said Bettina Volkens, Lufthansa’s human resource chief, “It is high time we sat down and found a solution here”.

Six killed in US drone strike in Pakistan