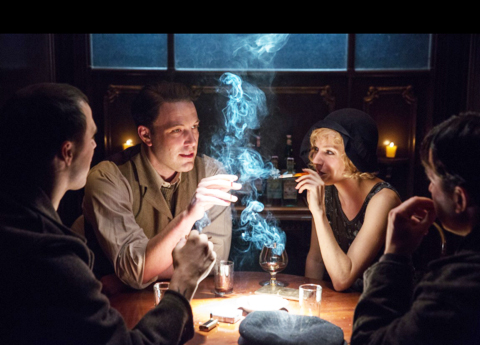 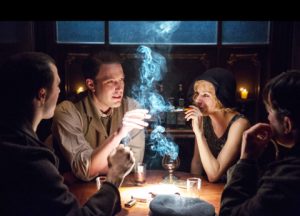 All in the Family was a popular ground-breaking TV Show from master producer Norman Lear back in the 1970s. That was a comedy. Elements of family play a pivotal part in the not remotely funny Live By Day. Presented by Warner Brothers this soulful look about organizing crime is now screening at Cineplex Cinemas around B.C.

Lots of people have dual roles in filmmaking.  So it’s no surprise to see hunky Ben Affleck behind the director’s chair as well as leading man in this smartly set well-acted period piece set in  The days prohibition, followers of organized crime know that there is money to be made in bootlegging and no one does it better than those syndicates run by the Italians and the Irish.

While the battle rages in Boson before heading to Florida Affleck suits up and lies not so low as the go to man for the mob in the land of sand, Cubans and corruption. Doing business with a gun comes in handy as a crime wave hits home with reckless abandon.

To help distinguish Live by Day from standard mob hits the producers have wisely included some not so subtle wise diversions including racial entanglements and religious interference. Calm under pressure Affleck is believable and does a good job alternating between being calm one minute and a vengeful killer the next.

With some surprises sprinkled along the way and an exceptional cast including Zoe Saldana, Brendan Gleeson, Chris Cooper and the divine Elle Fanning Live by Day turns out to be a fairly good look into organized crime and should be appreciated by those who enjoy sweet revenge and soulful relationships.