Surrey: “Dreams do come true.” Those were the first words spoken by Jay Minhas in tribute to the achievements Gurdev Sandhu and Iqbal Grewal began life in Canada building homes. Through hard work and a strong dream, they created a highly successful development company, Northwest Development, whose project “Little India” at 80th and 128th in the heart of Newton, was celebrated in a ribbon cutting event this past week.

“It has been the dream of Gurdev Sandhu, Iqbal Grewal and the entire team at Northwest Development,” said Minhas, “and today, look where we are today. Isn’t it nice?”

Describing the project Minhas said the project has all the professional services one needs including the lawyers, doctors, dentists and more. He added that there will also be a lot of unique shops, including two diamond stores.

In an interview with Gurdev Sandhu, President of Northwest Developments, he revealed that the concept for the centre came from a mix of cultures.

“It’s a mix of California and India,” he said. “If you see Jodhpur India, this project represents the colourful nature of that city.”

“Although the mall is still in the finishing stages,” said Sandhu, “it will be occupied and operating by the beginning of 2017.”

Mayor Hepner congratulated Sandhu and Grewal on a beautiful project, adding that Council is looking toward celebrating Little India as a tourist destination, a place where people will find haute couture in South Asian fashions

“I know it’s going to be an amazing success,” she said. “It’s been a delight to work with you on your fabulous projects through out the city, but I really admire the interest this complex has added to this area.”

Hepner went on to comment on the 80th Avenue traffic choke-point east of 128th assuring the audience that improvements are underway.

“We have been working with some of the utility companies already, and the revitalization of 80th avenue will commence as a priority project at the end of this year,” she declared.

Hepner went on to say that the city will work to make an even more beautiful entry-way into the Indian market area.

“I think that great things are in store for this area and it is a wonderful catalyst to advance, even more, the retail shopping that is going on in this area. I’m delighted to acknowledge that, along with my councillors who are here with me today.”

Councillor Tom Gill also delivered his congratulations on the project, making many of his comments in Punjabi, which delighted the audience.

Wrapping up the formal part of the event, before a hot lunch, Gurdev Sandhu and Iqbal Grewal, in the spirit of giving back, presented a cheque in the amount of  $11,000 to Yolanda Bouwman, Director Major Gifts for the Surrey Hospital & Outpatient Foundation, and two of her volunteer board members, Kulwinder Sanghera of Red FM and Mary Martin, also a Surrey Councilor. The money is directed toward the Surrey memorial Hospital Guru Nanak Emergency Ward. 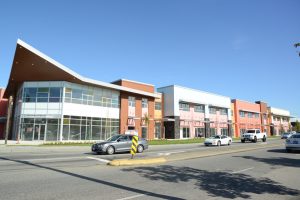 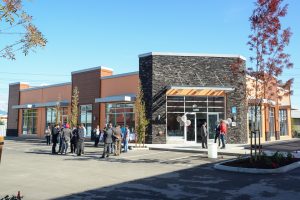 Paul Boparai, B.C. Liberal candidate from the riding of Surrey-Newton