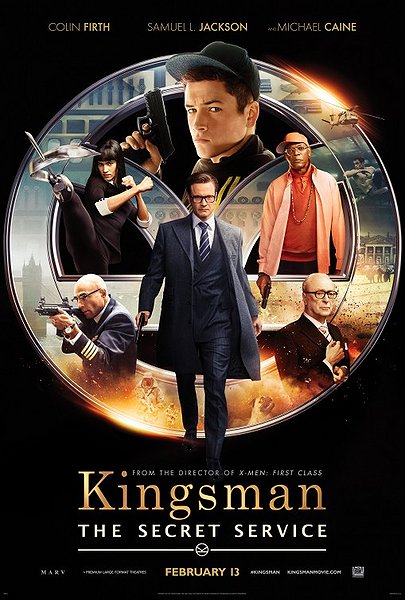 Action can originate in many ways. Decades has seen a slew of adventure films in Hollywood. Able to spoof spy films takes a certain knack. Credit the folks at 20th Century Fox for making the right choice in making Kingsman The Secret Service Designed by the creative team behind the successful Kick-Ass movies this one of a kind affair is delighting audiences at Cineplex Odeon Theatres B.C.
Give a delightful cast and a very smart script Kingsman takes off. Here we see a spy boy in training coming from a troubled background. Given a chance to join Up with the secret service the lad jumps at the chance. Well, not exactly.
Spies don’t come easy or off the rack. Normally the best secret agents need proper training and guidance. Here the mentoring is provided by Colin Firth. Dapper, deadly and dangerous Firth is terrific as the no-nonsense tutor who along with Mark Strong put a group of teenage raw recruits through the paces.
All good spy films need bad enemies and Samuel L. Jackson (Shaft) takes the cake as, what else, a megalomaniac set to take the world. Given an evil henchman/woman or two Jackson would make Ernst Stavro Blofeld proud.
Ridiculous? Yes. Entertaining? Highly. Kingsman is a fast paced spy lark that is full of energy and double entendre dialogue. Sharp, crisp and with enough James Bond moments to leave audiences shaken, not stirred Kingsman: The Secret Service is fitting fun for all ages.