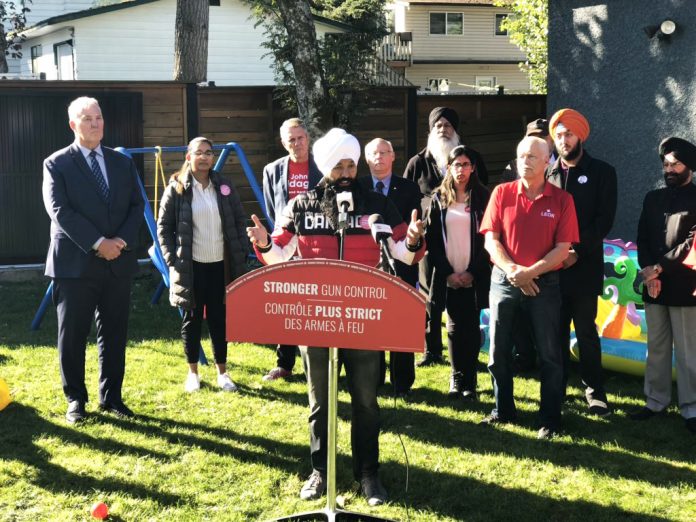 Surrey: Canadians deserve to feel safe in their communities. When they feel safe they engage with their neighbours, go to the park or go shopping in their community. And in just a few short days, Canadians will be presented a clear choice: re-elect a Liberal government that will strengthen gun control and keep our communities safe or go backwards with a Conservative Party that is beholden to the gun lobby that undermines public safety by questioning the ability of our officers to do their jobs.

As part of its campaign platform, a re-elected Liberal government will ban military-style assault weapons such as the AR-15 and introduce a buy-back program to fairly compensate owners.

A re-elected Liberal government will also work with provinces and territories to give municipalities the ability to further restrict or ban handguns while increasing secure storage regulations, addressing domestic diversion, implementing red flag laws and investing an additional $250 million to prevent gang-related violence. This builds on the $327 million we’ve already invested to help provinces and territories fight gun and gang violence and reinvest in border security to stop the smuggling of illegal guns across our border.

The Conservative Party of Canada at their 2016 convention adopted a plan largely written by the gun lobby to make most assault-style rifles more accessible and normalized. The Conservative Party leader has also called for size restrictions on ammunition clips to be eased, allowing for more bullets to be sprayed in a faster amount of time. That’s just not right – it’s dangerous.

This election provides a clear choice between a Liberal Party that prioritizes the safety of our communities against a Conservative one that is beholden to the gun lobby for money and votes.

Bill Blair said: “Too many Canadians have had to hear the news that a friend or loved one has been the victim of firearm violence. We are moving beyond simply offering our thoughts and prayers and taking action to keep our communities safe. At a time of increased gun violence we need stronger laws, regulations and punishments, not American-style gun culture as promised by the Conservatives.”

Randeep Sarai Liberal candidate for Surrey Centre said: “There have been too many senseless deaths in Surrey and the scourge of gun violence has plagued our community for far too long. In addition, to the historic investments that the Trudeau government has made to anti-gang initiatives in Surrey, a re-elected Liberal government will finally take the steps to ban assault weapons and handguns. It’s time to move forward and crackdown on gun violence because everyone deserves to feel safe in their community.”