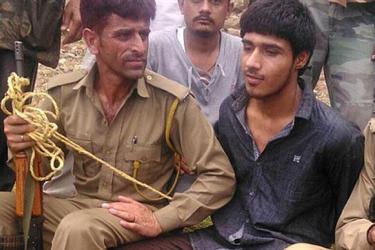 New Delhi, Aug 6 (IANS) A Pakistan-based man who identified himself as the “unfortunate father” of the Pakistani terrorist nabbed in Udhampur has said that the Lashkar-e-Taiba (LeT) wanted his son dead, not caught alive and that his own life is in danger.

Speaking to the Hindustan Times daily over phone, the “father”, who identified himself as Mohammad Yakub said: “I’ll be killed. The Lashkar is after us and the fauj is after us..”

The Hindustan Times contacted him on a phone number disclosed to interrogators by the arrested gunman Usman alias Mohammad Naved, who is said to hail from Faisalabad city of Pakistan’s Punjab province.

“You are calling from India. We’ll be killed. I am the unfortunate father,” Yakub told the daily.

“The Lashkar is after us. They probably wanted him dead and not caught alive. Please spare him,” Yakub said, referring to the LeT.

Usman, who was nabbed in Jammu and Kashmir’s Udhampur district on Wednesday, is being questioned in Jammu to find out more about his plans to strike terror in the country. According to Jammu and Kashmir Police, he has admitted he is Pakistani and hails from Faisalabad.

Usman along with a compatriot, had attacked a Border Security Force convoy on the highway near Samruli, about 10 km from Udhampur town, killing two troopers. The other terrorist was killed in the firing, but Usman was nabbed alive.

Never have been calculative as an actor: Aishwarya