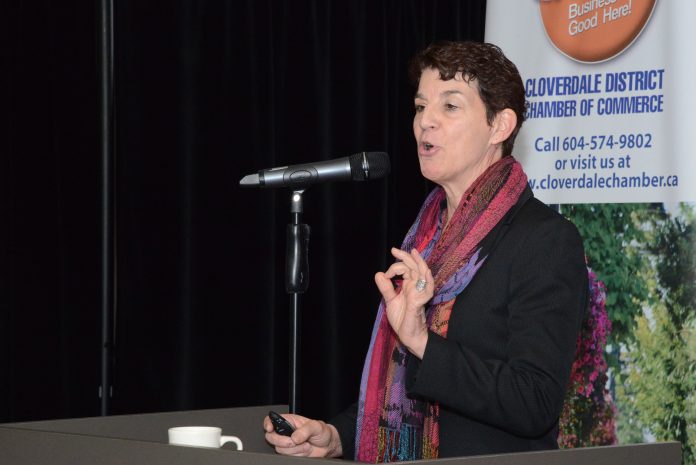 Kwantlen College was born out of Douglas College, in 1981, and mandated to provide services to the south Fraser region. Its first campus consisted of a number of portable classrooms and offices just off King George Highway in Newton. They graduated 149 students in their first convocation. Thirty-five years, and a quarter of a million students later, Kwantlen Polytechnic University has come of age, and appears to be moving quickly to meet the future needs of this rapidly growing region. Today the school, which awards about 2200 credentials annually has a student body of approximately19,500.

In a recent presentation to the Cloverdale Chamber of Commerce, Dr. Jane Fee, Vice Provost, Students, provided an overview of the university and where it’s going in the future.

The university has become a critical part of the fabric of the south Fraser in both a cultural and economic sense as it endeavours to produce the cadre of skilled people who can challenge the jobs available, now and in the future, in this growing market

Fee said that a recent survey of graduates showed 87% had found work within four months, and 44% were employed within a month of finishing their courses.

“KPU has seven academic faculties,” said Fee, “Arts, Business Science and Horticulture, Health, Trades and Technology, Academic and Career Advancement and our newly renamed Wilson School of Design after Chip and Shannon Wilson (of Lulu Lemon fame) who are now funding our new $36 million ‘Chip and Shannon Wilson Design Building’ on our Richmond Campus. Chip Wilson’s really into design and is helping move BC into one of the design centres of the world.”

According to the Vice-Provost, the school sets itself apart by the specific practice of combining experiential learning with hands-on experience, combining theory with practice.

“There are lots of polytechnic schools in the country,” said Fee, “but KPU is the only polytechnic university.”

“It’s where you combine the application and the theory,” she said, “and as a polytechnic university, it means we take that experiential learning and extend it up into full university degrees. We have bridging pathways, do work placements, co-ops, internships, and practica in almost all of our programs. We join the mind and the matter, the skills to do and the know how to actually make something happen, and being career focused, most of our students get work following their training. Our mission is to offer a diverse range of programs that blend theory and practice, critical understanding, social and ethical awareness that’s necessary for citizenship and rewarding careers.

During the presentation, Dr. Fee talked about some of the programs that are attracting a lot of attention, including a Bee Keeping program, that is generating a great deal of interest, a farrier program where they combine the art of shoeing horses with the education necessary to run the enterprise as a successful business, and the course that drew the most curiosity: On-line Marijuana Growing. She said that it was attracting interest from around the world, foremost coming from the University of the West Indies, where they are fascinated by the fact that KPU is the first North American university to move into the policy world, the regulation world, around legislated marijuana. She said it was not just the people here that were struggling with this issue, adding strongly that it is not a grow-op program.

Future Course Direction:
Following the presentation, Dr. Fee spoke with Ray Hudson about courses she would like to see at KPU.

Dr. Fee: “I’m imagining courses that would better enhance things we’re doing. For example, courses about how to run a farrier business. Our students go out to shoe horses all over the world and return to tell us they would like to turn it into a business and can we help them do that?
We have developed some courses in conjunction with our Growing and Brewery Operations Program that takes brew masters into the world of having their own businesses. We’d like to take those kinds of courses and extend them to other programs that we have. Our new Growing and Brewery Operations program in Langley, is a wonderful way to teach the elements of craft brewing, which is about business and chemistry, and it goes right through to the production area where the students actually produce beer.
We’d like to do some course work in Manufacturing Engineering, taking the kinds of technology that we currently use at our KPU Tech, campus and begin to extend that into the future world of manufacturing, which is not about some of the manufacturing tools we have now, but developing the tools for the future. It’s about secondary industry, which is well needed in this part of the world.

Ray Hudson: With the desire to move to the high tech realms, does the university plan to become more involved in the Innovation Boulevard medical project?

Dr. Fee: I think there are huge connections and one of them is through design. We have a young student right now who is starting up her own company, based on a line of clothes that she has created through our fashion program. It’s about making clothing for little girls who have complex medical problems. The idea is to create clothes that allow tubing to be run through them. It allows breathing apparatus to be imbedded into a vest or a jacket, so little girls can feel that they’re not always in the hospital, that they are not always on display. There are huge advances in terms of textiles, and what we often think about as fashion, that can move us into the world of supporting health and medicine.

Ray Hudson: The School of Nursing is a significant program of the University. Could we see it evolving to the point of turning out Nurse Practitioners for example?

Dr. Fee: I think that’s probably where we’re thinking of going next. We’ve just done a full review of all our nursing programs so that students will be able to come into a first year of exploratory programming in health and nursing and then decide where to go from there. We are also working on developing a program in Chinese Traditional Medicine and herbology, which is being done in conjunction with the University of BC. The private schools are teaching the Acupuncture programs, but our program would allow that kind of education to be given to MDs as alternatives to western modalities.

Ray Hudson: You mentioned design in a number of different contexts. Tell me more about the design school in Richmond?

Dr. Fee: It’s so new, I’m not even sure where it’s all going. What we are working to do, in conjunction with Chip and Shannon Wilson, is to create a design centre in BC. Our programs are in fashion and fashion marketing, interior design, graphic design, but one of the things our students are telling us is that there is a world of design which is about designing answers to critical questions, about learning the background processes of design thinking to help solve the world’s complex problems. So design doesn’t need to be just about products necessarily, it can be about answering problems, conceptual approaches and challenges.

Ray Hudson: You are about to expand business education considerably at the future downtown Surrey campus at Surrey Centre.

Dr. Fee: The new campus will be opening in Central Plaza, downtown Surrey in early 2017, in the 52 story project known as the 3 Civic Plaza. This complex will offer a boutique hotel, high-rise condominiums and house Kwantlen Polytechnic’s downtown campus, which will be the focus of the continuing professional studies and our post baccalaureate programs in business. It will join the four other campuses in Newton, Richmond, Cloverdale and Langley.