The worst floods in over 100 years has wreaked havoc all over Tamil Nadu and most of Chennai and surrounding areas are in knee deep water. With no electricity, no food & drinking water in most of Chennai, army & navy was called in to restore confidence and the severity of the situation was noticed when Prime Minister Narendra Modi took an aerial tour with Tamil Nadu Chief Minister Jayalalitha and immediately announced an emergency package of Rs.1,000 Crores. With over 295 deaths and estimated losses of Rs.100,000 Crores, the Tamil Nadu CM has asked the Central Govt. to declare National Calamity and the rest of India finally realised the grim situation in Tamil Nadu. As in every natural disaster, the film industry took notice of the situation and immediately mobilized help in worst affected areas. RAJNIKANTH, who is loved, respected & worshipped in South India , met the Chief Minister Jayalalitha and handed a cheque of Rs.10 Crores to Chief Minister’s Public Relief Fund. Rajnikanth also cancelled all celebrations for his 65th birthday on December 12th and indefinitely postponed the planned announcement of EETHIRAN 2, supposedly the costliest Indian movie ever. KOLLYWOOD’s SURIYA, DHANUSH , VISHAL & KARTHI donated Rs.50 Lakh , ALLU ARJUN gave Rs.25 Lakh and MAHESH BABU & JUNIOR NTR donated Rs. 10 Lakh. SIDDHARTH, KHUSHBOO, VISHAL & KARTHI’s houses were flooded and yet Siddharth & R.BALAJI have mobilized RESCUE CHENNAI GROUP , which is working in flooded areas around Chennai. 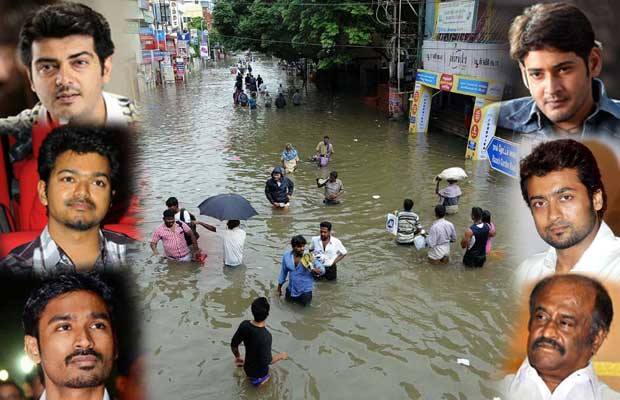 MADRAS ) and mobilizing aid from family owned RAMANAIDU STUDIOS in Hyderabad and sending relief supply trucks to Chennai. Meanwhile, young Tollywood actors lead by NAVDEEP have been collecting funds at various malls in Hyderabad  and sending immediate supplies to Tamil Nadu. PRABHAS of BAHUBALI fame also donated Rs.15 Lakh while JAYARAM gave Rs.10 Lakh. MOLLYWOOD’s MAMMOOTTY, DULQUER SALMAAN & MOHAN LAL have also been collecting funds and arranging relief trucks from Kochi to Chennai. SANDALWOOD’s industry has also been helping from Bengaluru & Mysore and many stars are even in Chennai to help the relief efforts. KOLLYWOOD (Tamil Film Industry) , TOLLYWOOD (Telugu Film Industry), MOLLYWOOD ( Malayalam Film Industry ) & SANDALWOOD (Kannada Film Industry) are all out to help their Southern brothers & sisters but surprisingly, the BOLLYWOOD’s reaction, so far ,  has been very shocking indeed. Apart from AMITABH BACHCHAN, FARHAN AKHTAR, VIVEK OBEROI and a few others expressing sadness over the grim situation, the only contribution has been from SHAHRUKH KHAN & DILWALE team, who gave a cheque of Rs.1 Crore to Chief Minister’s Public Relief Fund. DILIP KUMAR, who considers Chennai as his second home, cancelled his birthday celebrations on December 11nth to support his Southern brothers & sisters but that’s all from Bollywood , the world’s most popular film industry, which is revered around the world. No statements of vocal or monetary support from SALMAN, AAMIR or SAIF KHAN, HRITHIK or any other KAPOORS, KHANNAS or KUMARS and for that matter, any Bollywood producer or directors.

Shocking indeed and this has baffled many and surprised others in & out of film industry because generally, the film industry has always come together, stood together and worked together. Yes, ABHISHEIK BACHCHAN, RITEISH DESHMUKH & JACQUELINE FERNANDEZ have been helping the flood victims in Chennai but much more is expected from Bollywood. Chennai’s beaches and streets are littered with garbage and it’s said that normalcy is not expected for months and it’s high time that all Indians get their act together to help their Southern brothers & sisters who’re going through the worst time in a century! 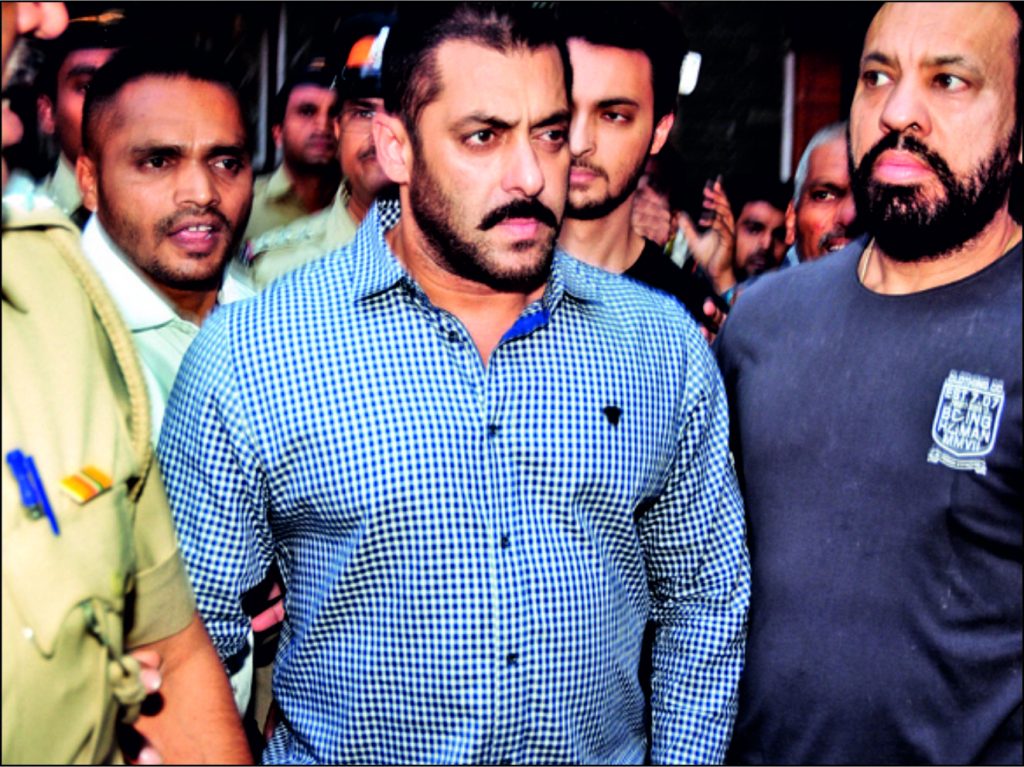 SALMAN KHAN has been absolved of all charges for the 2002 Hit & Run case by the Bombay High Court for lack of evidence and with that, the 13-year case came to a close. Salman, who was found guilty of negligent driving while drunk by the lower court and sentenced to five years imprisonment, walked free and even cried when the judgement was delivered but surely, the controversial decision is now being talked about on twitter & social media and it’s literally a field day for media, fans and critics alike. His fans celebrated by dancing to Salman’s popular hits while others are simply calling it a bad day for justice. ANUPAM KHER, HEMA MALINI, MADHUR BANDARKAR, ADNAN SAMI and many more have congratulated Salman Khan and celebration parties will go on for some time in Salman camp but what about JUSTICE! It sure seems that there’s no justice for poor in India while others with clout can walk free. BEING HUMAN is surely not Being Human, that’s what one tweet said and the other said, HIGH COURT DHAN PAYO! Well, figure out but one thing is for sure that people like SALMAN KHAN CAN NOT BE CONVICTED AND NEVER WILL BE CONVICTED IN INDIA!!!

As per my predictions, Vishal Pandya’s HATE STORY 3 has been declared a SUPER HIT and like I’d said, the makers have announced HATE STORY 4 and the shooting will start soon. Sex and horror sells in India and do very well if marketed well and SHARMAN JOSHI, after the super flop of SUPER NAANI, DAISY SHAH, after the flop of JAI HO, and ZARIN KHAN, after the super flop of VEER, have reason to celebrate as HATE STORY 3 has already made a profit of over 150% in 5 days and it’s still going very strong. Meanwhile, Imtiaz Ali’s TAMASHA with RANBIR KAPOOR & DEEPIKA PADUKONE is doing very well in the Overseas territories while it managed to collect Rs.67 Crores in two weeks and if it crosses Rs.75 Crores then it surely would be considered a hit overall. The promotions of Rohit Shetty’s DILWALE & Sanjay Leela Bhansali’s BAJIRAO MASTANI are in full swing as they open on December 18nth but before that Mahesh Bhatt’s THE SILENT HEROES, which is a tribute to 360 million deaf children in the world, opens this week but would hardly register any footfall because meaningful films like last week’s KAJARIYA & ANGRY INDIAN GODDESSES are hardly watched and instead thrashed by some as the producers of ANGRY INDIAN GODDESSES have been receiving death threats for denigrating Indian Goddesses ! AMIT KUMAR, the wonderful singer, composer & son of KISHORE KUMAR, recently celebrated his 50 years in singing with a concert which was attended by RISHI KAPOOR, JEETENDRA, BABUL SUPRIYO, LEENA CHANDAVARKAR & BHAPPI LAHIRI amongst others at Mumbai’s SHANMUKHANANDA HALL. With that, it’s time to say Good Bye but not before wishing KHUSHIALI MUBARAK to the entire Ismaili Community as they celebrate the b’day of His Highness AGA KHAN and a reminder to watch this week’s YAADEIN, which celebrates the 93rd b’day of DILIP KUMAR, on Sunday, Dec.13nth at 1 PM on SMC#116.

Personal experience with Neem and Psoriais

Welcome will welcome the sequel Welcome Back!!!