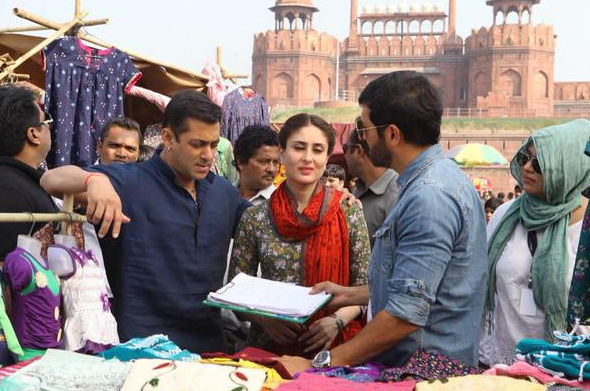 Mumbai, July 3 (IANS) There is high optimism from all quarters that “Bajrangi Bhaijaan” might eclipse all box office records in Bollywood but hero Salman Khan says his heroine Kareena has already assumed that it will be the biggest hit of all time.

At a media event to launch the Eid song from the film, Salman joked that Kareena was trying to alienate herself from the movie.”Kareena is already enjoying the success of the film in London. In her mind, the film has already broken all box-office records. And hence she is partying with her husband (Saif Ali Khan) and father (Randhir Kapoor).”

The question was prompted by Kareena’s absence from the song launch of “Aaj Ki Party” sung by Mika Singh. Kareena has claimed in several interviews before that she feels “Bajrangi Bhaijaan” will be the biggest hit of the year.

Salman also quipped that there is no chemistry between him and Kareena and so calling her ‘behenji’ was a cakewalk. “I used to forget that her name also has a Khan attached to it. But after finishing the song, I would add Khan back.”

The film, also starring Nawazuddin Siddiqui, Harshaali Malhotra among others, will hit the screen on July 17.