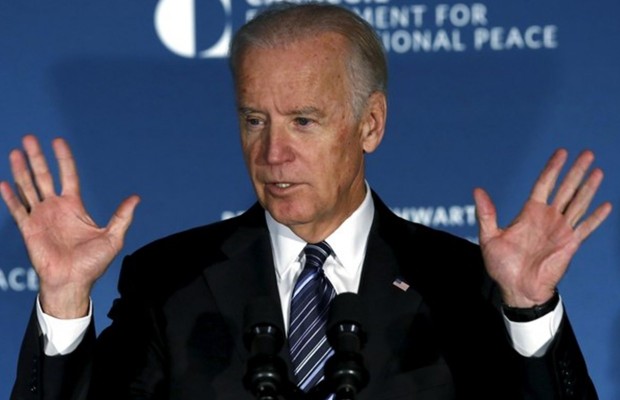 With his wife, Jill, and President Barack Obama at his side in the White House Rose Garden, Biden, who is running third in polls after Clinton and Vermont Senator Bernie Sanders, explained his decision not to run, saying the window for a successful campaign “has closed”.

Even as he abandoned a presidential run, Biden positioned himself as a defender of the Obama legacy as he highlighted Democratic values and themes of income inequality.

“While I will not be a candidate, I will not be silent,” he said. “I intend to speak out clearly and forcefully to influence as much as I can where we stand as a party and where we need to go as a nation.”

Pundits and politicians have speculated for months whether Biden, 72, would enter the presidential race. But Clinton’s good performance at the first Democratic presidential debate on October 13 led observers to suggest that Biden’s moment had passed.

According to a pool report, Obama ignored pool questions regarding Biden’s decision but offered a strained smile and perfunctory wave as he boarded Marine One to begin a trip to West Virginia.

Democratic Senate Minority leader Harry Reid told CNN that Biden would have been a good candidate “but he made the right decision”.

In the absence of a grassroots organization, Biden’s late entry would have posed a nearly insurmountable challenge.

He has been trailing Clinton and Sanders in every national poll. Biden trailed Clinton by more than 20 points in a CNN/ORC poll released Monday. He stood at 18 percent compared to Clinton’s 45 percent and Sanders’ 29 percent.

Nevertheless Biden’s decision will come as a relief to the Clinton campaign as she seeks to stabilise her White House push after months on the defensive over the use of a private e-mail server for official work as secretary of state.

She is slated to testify before Congress on the issue on Thursday.

Biden’s decision would now make the Democratic nomination contest a straight fight between Clinton and Sanders with former Maryland Governor Martin O’Malley posing not much of a challenge.

Biden’s decision came after a political career that spanned 40 years and was bookended by tragedy.

Soon after he won his Delaware Senate seat in 1972, Biden’s wife and infant daughter died in a car crash. Then in May 2015, his son Beau, an Iraq war veteran, died.

Police recover body of male from the Fraser River

Bomb blast outside bank in Caracas