There’s a powerful force in Surrey working to help young people who are in jeopardy of losing their way, of slipping into a negative and dangerous lifestyle, to turn themselves around. It’s called the Wraparound Program, Wrap for short.

“It’s a partnership between the Surrey School District, RCMP and the City of Surrey. The program’s objective is to positively attach youth to school, their community and the home by building a trusting and positive relationship. Parents, caregivers and/or guardians are included in goal setting while assisting the program’s objective in building a positive lifestyle and self-worth for youth.” SD36 release.

One of the highly motivated, highly dedicated members of the Wrap Team is Jesse Sahota, a young man who has experienced the negative side of life and who, with the help of an intervention program from the School, lead by his mentor and Wrap Program Head, Rob Rai, has turned his life around, graduated university and has become a Canadian National Wrestling Champion and renowned Kabaddi athlete. Now he has turned his laser-like attention to helping other young people turn their lives around. During the recent spate of street violence in Surrey, Jesse stepped up at community meetings to tell the parents and public what’s really going on from the perspective of one who’s been there. 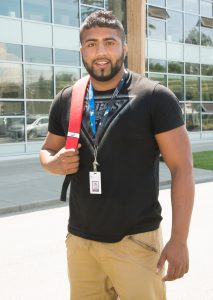 He agreed to talk about his journey and how he now passes along the program with the same intense passion that he experienced not so long before. He spoke with Ray Hudson of the Asian Journal, asking him to describe his role in the program:

JS: I’ve been employed in the program for five months, although I’ve been volunteering since 2010. My job is to deal with youth involved in serious incidents, students from 12 to 19 years old who have been involved in shootings, stabbings, drug trafficking and possession of drugs. I build relationships. I don’t like to call them clients, I like to call them my friends or other similar names. I tell them what I do is beyond a job. I say, ‘I’m probably going to see you for the next twenty or thirty years, and I want to see you for the next twenty thirty years. This six, eight or sixteen-week program is not the end of our relationship.’ I want to build a friendship, because that’s how I get the effect that I want. That’s the effect that Rob (Rai) gave to me when I was under his wing. Rob always asks me if I’m happy doing the job I’m doing, and I tell him that I feel very fortunate to do the work I do. It’s very rewarding and I’m humbled by the opportunity. I thank him every day for this.

AJ: With the benefit of hindsight, do you have any sense of when it began to go off the rails for you, and why?

JS: I was an immigrant student, even through I’d been here since I was two or three years old. I grew up in a family where my parents didn’t speak English, and still don’t. They were at work through most of my childhood so I took care of my little brother from the age of seven, he is 2 ½ years younger. We were on our own and grew up on our own. My parents were very young and had to work very hard just to make ends meet. I know that not having that early parental guidance kind of threw me off. My peers became my biggest influences, and around grade four I could feel myself slowly drifting away. I was fighting, not caring, insulting people, bullying, stealing and wasn’t afraid of the consequences. In society we have rules and I began to not respect those rules. By grade seven I have been expelled from school after several suspensions.

AJ: How did your behaviour impact your brother?

JS: Not well, in his elementary school he got into lots of trouble, and even into high school years he was getting in to trouble. But as I improved my behaviour he did also. I made it my priority, that even as early as grade nine, I would never mess up in front of my brother. I did try to be the best role model I could be for him.

AJ: When you were expelled, what went through your head?

JS: I was devastated. At the time I didn’t know what to say because I couldn’t tell my parents. I was afraid. I thought about running away from home, I thought about suicide. I was just so afraid I didn’t know what was going to happen. Basically my principal said I wasn’t coming back to any school in Surrey. I remember the day very vividly. It was a really bad day in my life. Having had the success I’ve now had in my life, I wish I could go back and change that day, but from our hardships we become who we are.

AJ: That was the day you hit bottom.

JS: It’s very rare for someone so young to get kicked out of elementary school, you have to be really bad. They had a set protocol, and had a district meeting and decided I would be sanctioned off the school property, which sucked because I lived right next to the school. There were a lot of terms and conditions, I couldn’t play with my friends or associate with certain people, and I had to meet with Rob Rai on a weekly basis.

My parents got the call from the principal that weekend saying that I was in some serious trouble and that she had a list of some 25 offenses that I had done over a year and a half. I hadn’t told them because I was too scared. Still, I kept saying I didn’t do it, deny, deny, deny. My parents went into denial as well saying ‘no, it was not my son.’ It was 48 hours until I admitted that I had done everything. Then my parents accepted what the principal said, and accepted that I was in some serious trouble.

AJ: When you actually came clean and took responsibility for it, how did you feel?

JS: It made me feel kind of powerless. There was no sense of relief. It was like admitting to my mistakes, but even so it wasn’t the end of it all. I wasn’t relieved because I knew I was still in deep trouble. Even though I’d accepted it, my mind hadn’t changed yet. At that point I hadn’t completely changed.

The first day I went to my new school I got into a fight, and if my principal had known my record I would have been kicked out. But my teacher said, “I’ve never done this before, but I see something in you and I’m going to give you one more chance.” So I was relieved because getting kicked out on my first day would have sucked. I guess some of the kids were pushing me around and I punched one in the eye and he just dropped. Obviously I did it but I was thinking, ‘what the hell did I just do? Come on!’ It was my first day, lunchtime! So that was kind of scary. I never had any more trouble after that and I had a really great experience at that school.

When I went into high school, you know my mentality was ‘don’t get caught! You’ve been caught before, don’t get caught,’ which is not the right mentality because I was still doing the bad things.

I got busted again in Grade 9 for selling illegal fireworks. I called the kid selling then them and told him I wanted to buy a bunch, then beat up the kid and stole the fireworks. The Constable happened to be driving by and saw me. That day was a real wake up call because I finally realized, it’s not about getting caught, it’s about becoming a better person. After that day I didn’t even get a detention. And that was the point when I said, I’m done with this! Coincidently, the day I decided I was going to become a better person, I decided I was going to devote all of my time to wrestling. I’d get up at 5:30, go train at the local gym, come back and eat breakfast, go to school, come home, do homework, go to practice, come home and sleep for the next three or four years. That was it. I missed every party, but I did go to my graduation, but that was it. I didn’t care about being the most popular guy anymore. My only focus was that I had to accomplish my goal.

Academically, I had a scholarship so I went to SFU and did a Criminology Degree.

Immediately upon graduation I started volunteering with the Wrap program and the sister programs, because Rob has always been a mentor and I always go to him for advice. He told me that he wanted me to help out with the programs, to give back to the programs that helped me out. I said, no problem, and here I am.

Next week, in the conclusion of the interview, Jesse talks about the impact his clients (friends) are having on him and his satisfaction when things work out.

Two companies found guilty of to two counts each under the...