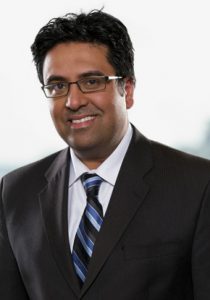 Premier Christy Clark and Today’s BC Liberals have acclaimed Jas Johal as the 2017 candidate for the new provincial riding of Richmond-Queensborough.

“It’s an incredible honour to run in a riding that straddles the two great communities of Richmond and New Westminster,” said Johal. “For 23 years, I’ve had the incredible privilege of asking questions on behalf of British Columbians. Now I hope to play a role in finding the some of the solutions.”

Johal is an award-winning journalist with over 23-years of reporting experience. From 2008 to 2011, he served as Global Television’s Asia bureau chief based in Beijing and New Delhi, where he reported extensively on economic and foreign policy, energy, food, and water security, as well as labour and human rights.

In 2013, Johal became a media fellow at the Asia Pacific Foundation, producing a documentary that focused on Asia’s energy security and its impact on Canada. He is also a recipient of two Jack Webster Awards, one RTNDA National Award, and a Canadian Association of Broadcasters’ Award.

Most recently, he served as Director of Communications for the BC LNG Alliance, where he was responsible for promoting B.C.’s generational LNG opportunity, and the economic and social benefits it will create.

“Like all parents, my wife Seera and I want to do our part to leave a better province for our son Ishaan. That’s why I’m running for the BC Liberals in 2017,” added Johal.

“The upcoming election is too important to stand on the sidelines. I’m ready to be a part of the team that fights for a strong economic future by creating good jobs, growing and diversifying our markets, and investing in public infrastructure for the benefit of our next generation.”

“For over 20 years, Jas has been a trusted voice for British Columbians across the province,” said Premier Christy Clark. “Now, as the BC Liberal candidate for Richmond-Queensborough, he has an opportunity to use that voice to do even more good work, this time from inside the Legislature.”

“We have a plan to put British Columbians first, and it’s working. It’s qualified candidates like Jas who will work hard to keep growing Canada’s leading economy so that we have the ability to focus on the things that matter most, like taking care of the people we love.”

Lack of pipelines will cost Canada $15.8 billion this year