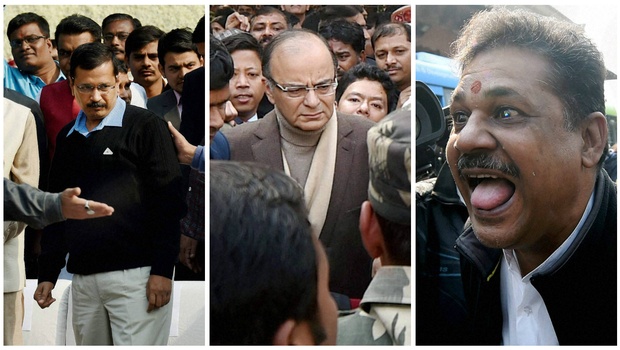 New Delhi, Dec 21 (IANS) Finance Minister Arun Jaitley on Monday filed a defamation suit against Delhi Chief Minister Arvind Kejriwal and sought Rs.10 crore in damages for accusing him of corruption when he headed the DDCA. Kejriwal retorted that he and his Aam Aadmi Party cannot be intimidated.

Even as a combative Jaitley defended himself in parliament against the corruption charges, fellow BJP MP Kirti Azad, who has been alleging major financial bungling in the Delhi and District Cricket Association (DDCA) for years, demanded to know why the minister had not sued him.

The Delhi High Court said it would hear on Tuesday the defamation suit slapped against Kejriwal, who took on Jaitley from the day the CBI raided his principal secretary Rajendra Kumar for alleged corruption.

“He (Jethmalani) will appear for Kejriwal and other AAP leaders in the Delhi High Court,” a government source said on Monday.

Jaitley also reached the Patiala House Court in the company of several party leaders and ministers where, as his supporters raised slogans in his support, he filed a criminal defamation complaint against Kejriwal and AAP leaders including Kumar Vishwas, Sanjay Singh and Ashutosh.

Advocate Sidharth Luthra said: “No member of the family of Jaitley is involved in any capacity with the companies involved in the DDCA case.”

Even as Bharatiya Janata Party president Amit Shah defended Jaitley, saying he was respected for his honesty and integrity, Kirti Azad demanded a time-bound probe by a court-monitored Special Investigation Team into the DDCA affairs. He said a CBI inquiry would take too much time.

“I have been raising the issue of corruption in DDCA since long,” the former India player told IANS, hours after Jaitley filed the case against Kejriwal.

“This was my issue which was hijacked by the Aam Aadmi Party and the Congress for political gains. In fact, they have raised this issue on the basis of my letters.

The Congress, which faced Jaitley’s wrath in the Lok Sabha, sought a Joint Parliamentary Probe instead.

Jaitley refuted the allegations against him, saying the DDCA when headed by him gave a “proper” cricket stadium to the national capital. He said 43 corporate boxes were created and tickets were sold in advance for 10 years to raise financial resources.

The minister, who was frequently interrupted by Congress members, said the stadium was built at a total cost of Rs.114 crore. Taking a dig at the Congress, Jaitley said the Jawaharlal Nehru Stadium here was renovated for Rs.900 crore for the 2010 Commonwealth Games.

The Delhi government called a special session of the assembly on Tuesday to set up a panel to probe the alleged financial irregularities in the DDCA.

Kejriwal said the session would discuss the “DDCA scam and CBI raids on the Delhi Secretariat”.

“Jaitley cannot intimidate us with court case. We will continue our fight against corruption,” he tweeted.

He asked Jaitley to cooperate with the Commission of Enquiry set up by his government and prove his innocence.

Azad, a Lok Sabha member from Bihar, on Sunday alleged massive corruption in the DDCA. He said he had done no wrong by raising an issue involving Jaitley.

“What wrong I have done? I am fighting against corruption and my fight is not against any individual or any party,” he told IANS.

The cricketer-turned-politician vowed to pursue the DDCA case – which he has been raising for eight years – till its “final conclusion”.

Azad said the probe into the DDCA by the Serious Fraud Investigation Office (SFIO), done under the previous Congress-led UPA regime, was of a civil nature.

He alleged that the DDCA gave out contracts to fake companies, paying them crores of rupees in cash, and had fudged the audit of accounts.