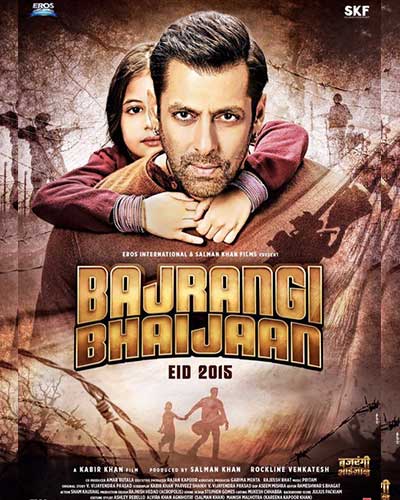 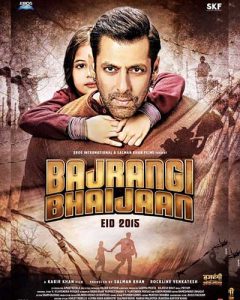 Ever since PAKISTAN was carved out of India in 1947, the INDO-PAK theme has been popular with producers from both sides and whether the films were about partition or Indo-Pak bashing, the higher pitched films were smashing success at the box-office. GADAR, SHAHEED-E-MOHABBAT PINJAR & EARTH 1947 are some prime examples, however, the mutual bashing got some reprieve as movies like KHAMOSH PAANI & KHUDA KE LIYE made incredible impression on people of both sides . Yash Chopra’s VEER ZARA and Raj Kapoor’s HENNA are amongst the popular cross border love stories to be appreciated on both sides and it’s against this background that Kabeer Khan’s BAJRANGI BHAIJAAN is releasing this Friday on Eid day with many predicting the film to do thunderous opening with some predicting the film to cross Rs.300 Crores in short time. Kabeer Khan, whose KABUL EXPRESS, NEW YORK & EK THAA TIGER were well received at the box-office, is expecting a lot from his latest where India’s BAJRANGI BHAIJAAN aka SALMAN KHAN, who’s in love with KAREENA KAPOOR, is on a mission to take a young Pakistani girl, who accidentally gets lost in India, back to her family in Pakistan . Last year Pakistani film WAR, a film about Indo-Pak proxy war, swept the box-office but BAJRANGI BHAIJAAN is all about love and this explains that the film, barring a few cuts, is also releasing in Pakistan on Eid day inspite of Adnan Sami’s ‘ Bhardo Jholi Meri…’ qawaali copyright controversy . Controversies aside, the film stars SALMAN KHAN, KAREENA KAPOOR & NAWAZUDDIN SIDDIQUI and the music & songs topping charts, this could very well be another hit of SALMAN KHAN on another EID release. With so much riding on this film, let’s hope that the success of this Eid Day release will transform into better relations between India & Pakistan as the Prime Ministers of both countries met in Russia recently and it was announced that India’s Prime Minister will visit Pakistan very soon !!!

Neither Kareena nor Amrita, Vidya, Priyanka or Sonakshi came to Shahid’s reception!!!
Photographers were waiting anxiously and the entire media was abuzz to get a glimpse of SHAHID’S exes, however, none of them showed up to his lavish reception at Mumbai’s Palladium Hotel and the expected fireworks never really happened. Yes the celebrities were there lead by AMITABH BACHCHAN, ANIL KAPOOR, KANGANA RANAUT, RANVEER SINGH, ARJUN KAPOOR, SONAM KAPOOR, DIA MIRZA and VISHAL BHARDWAJ amongst others but none of the KHANS showed up and surprisingly even RANBIR KAPOOR, KARAN JOHAR and some of SHAHID’S colleagues were missing as well. SHAHID’S marriage was trending on social media for a while and the media frenzy was at its peak but somehow it didn’t materialise the way it was planned and surely many are shaking their heads. What matters most is that Shahid-Mira are obviously very happy and so are their families and that explains the continuous parties on the sets of Jhalak Dikhla Jaa and I’m sure the celebrations will continue for a while as we, at ASIAN JOURNAL, wish the newlyweds a very happy marriage life!!!

Bahubali is on Record Breaking Spree!!!

INDIA’s most expensive film (estimated at Rs.250-300 Crores) BAHUBALI has been in news for some time and more so ever since it released worldwide and started shattering records from the word go. The film collected Rs. 50 Crores on the first day shattering Shahrukh Khan’s HAPPY NEW YEAR record, crossed Rs. 100 Crores in two days and made another record and then became the first movie to cross Rs. 200 Crores in 5 days beating PK record and yes, it did beat PK record already by making most money in the overseas territories and the way it’s going, S.S.Rajamouli’s BAHUBALI could be India’s first movie to cross Rs.1, 000 Crores in box-office collections, so stay TUNED! 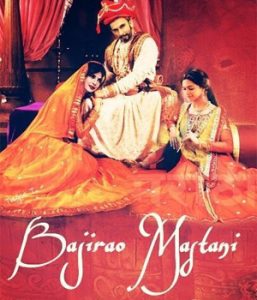 SANJAY LEELA BHANSALI’s long awaited film BAJRAO MASTANI is not releasing till December,’15 and the trailer is releasing with BAJRANGI BHAIJAAN but the first look of the film has created such a buzz that it seems Sanjay’s dream project is a winner already. Starring RANVEER SINGH as BAJIRAO PESHWA, DEEPIKA PADUKONE as MASTANI and PRIYANKA CHOPRA as KASHIBAI, his first wife, the posters are being talked about and it seems Ranveer-Deepika pairing has another winner already.
BTW the film is releasing on December 18th! After going berserk on twitteratti, HEMA MALINI is absolutely mum and staying away from any other controversy and recovering at home after the horrible accident near Jaipur ; AMITABH BACHCHAN has done it again and his KABADDI song ‘ Le Panga …’ to promote the Kabaddi League is trending all over and suddenly Kabaddi is catching up with youngsters all over India ; last week’s releases tanked against the onslaught of BAHUBALI but all eyes are on this week’s EID release of BAJRANGI BHAIJAAN and many are predicting earth shattering collections on the opening day which could swell to records in the coming days as SALMAN KHAN’s EID releases normally do very well at the box-office ( BTW Salman Khan films have so far collected Rs.1,200 Crores at the box-office thus making him the most bankable star in Bollywood ); SURREY FUSION FESTIVAL 2015 will see our very own JAZZY B & B KAUR at Surrey’s Holland Park on Saturday, July 18th for a FREE concert; FIJI FESTIVAL 2015 is on Saturday,July 18nth at Burnaby’s SWANGARD STADIUM and the day long festival showcasing FIJI is absolutely FREE ; and with that it’s time to say good bye but not before reminding you all to watch this week’s YAADEIN featuring Bollywood songs filmed in & around JAIPUR from the newly opened JAIPUR INDIAN CUISINE on Sunday, July 19nth at 1 PM on SMC # 116 ! Finally, on behalf of KAMAL’S VIDEO PALACE, KVP ENTERTAINERS and my family, EID MUBARAK to all my Moslem friends & families! 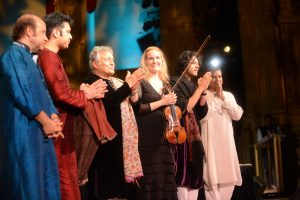 Proclaimed as INDIAN SUMMER FESTIVAL WEEK by Vancouver’s Mayor Gregor Robertson at the opening day gala at Vancouver’s iconic ROUNDHOUSE COMMUNITY CENTRE, this year’s Indian Summer Festival (July 9-18) started on a robust mood with many activities around. As always, VIKRAM VIJ of Vij’s & MY SHANTI restaurant curated the food with popular chefs from Vancouver and needless to say that big line ups at INDIAN RAILWAY BAZAAR themed venue was a testament to the popularity of the concept. Well known stage designer ARADHANA SETH was taking pictures in front of one of her mural and SURYA BRASS BAND was parading in and out of the venue belting their popular Bollywood hits while Rup Sidhu was spinning his magic inside. Credit the Vancouver Summer or the change of venue, the Indian Summer Festival Opening Gala (rated as one of the best by many magazines) lived up to its reputation and now, I’m looking forward to the Taj Mahal Foxtrot: Bombay’s Jazz Age & ISF2015 Closing Gala at THE IMPERIAL tonight!

Sarod maestro mesmerises Indian Classical Music fans!!!
There couldn’t have been a better place than Vancouver’s iconic ORPHEUM THEATRE to host Indian Sarod Maestro USTAD AMJAD ALI KHAN & his sons AMAAN & AYYAN ALI KHAN, along with VSO Violinist JEANETTE BERNAL-SINGH, and the symphony they created will resonate with Vancouvrites for quite some time. Billed as the prime event of ISF2015, the place was packed with music lovers and the two hour concert stretched beyond imagination and ended with people asking for more. The very fact that Ustad Ji got standing ovations, speaks of his mastery over Sarod which is recognised around the world and the board & volunteers of ISF2015 deserve a big round of applause for yet another feather in their continuing efforts to make ISF a regular feature in the art & literature world of VANCOUVER!

Use these 5 Gmail hacks to reduce your email pain